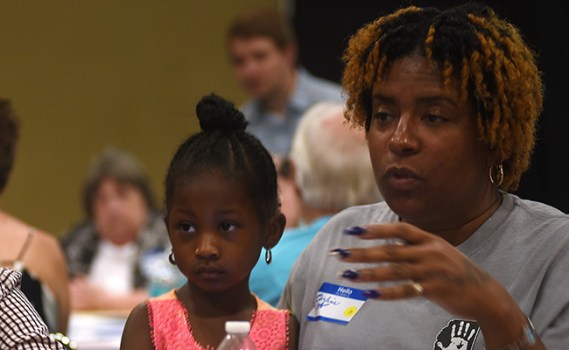 Earline Collins holds her granddaughter, Alaynah Goodin, 4, and talks about having more things for children to do in downtown Natchez Thursday at the FOR Natchez phase two Public Workshop at the Natchez Convention Center. (Nicole Hester | The Natchez Democrat)

NATCHEZ — City officials and about 175 Natchez residents gathered Thursday at the Natchez Convention Center to pitch their ideas for the downtown Natchez revitalization project.

Conducted by the non-profit group FOR Natchez, the public workshop’s objective was to receive feedback from locals so they can have a say in downtown Natchez’s future.

Lead consultant Phil Walker said he was very encouraged by the turnout at the workshop.

“It’s a great turnout,” Walker said. “We clearly see when we do this kind of process, if you get a strong, robust turnout like this, that bodes very well for success for future plan implementation.”

The workshop marks the beginning of phase two of the revitalization project.

The event began with presentations from Walker and economic and strategic planning consultant Randall Gross.

Walker, formerly Natchez’s city planner, laid out the study area of the project, which spans from the edges of the bluff extending east past Martin Luther King Jr. Street. The plan focuses on revitalizing two “anchors” of downtown: the bluff and the “MLK triangle,” also considered the city’s Black Historic District, which is encompassed mainly by Martin Luther King Jr. Street, Franklin Street and St. Catherine Street.

Gross followed by presenting some key findings from the project’s retail and housing market analyses, conducted in phase one.

One of the highlights from the presentation concerns data about retail properties within the study area. Gross’ data indicated approximately 41 percent of the 300,000 or so square feet of retail space that could be occupied by businesses downtown is currently vacant.

“If I’m doing a pro-forma or a financial analysis for a developer … I’m going to target a 5-percent vacancy,” Gross said.

“We have 41 percent vacancy downtown, and we need to get rid of that because that’s a serious issue we need to address.”

Gross said one of the primary issues causing this massive vacancy is the difficulty and cost of rehabilitating structures in the area.

Additionally, Gross said a study he conducted among a sample of Natchez businesses showed sales have decreased over the last five years, contrasting an uptick in sales on average nationally.

While Gross’ presentation noted aspects of downtown that need fixing, he also pointed out some positives about the city’s outlook.

For example, he noted that incomes in Natchez have risen on average in the past few years, and they are expected to rise by approximately 2 percent in the next few years.

After arming attendants with all this information, locals were “deputized” as city planners for the evening.

Dispersed around 15 tables, each surrounded by groups of eight to 10 people, residents discussed what they like and do not like about the downtown currently and what they want to see happen in the future.

Each table received a three-by-four-foot map and some markers. The consultants charged residents with highlighting important existing features and marking down potential ideas for future developments.

After approximately an hour of discussion, each table delegated a spokesperson to tell everybody the three (or more) best ideas discussed by the table. Ideas ran the gamut, but propositions included:

4Building an open-air pavilion or amphitheater

4Adding a parking lot or garage with shuttles to local businesses

4Adding a grocery store in the downtown Upgrading the city’s infrastructure, especially sidewalksRelocating the post office to the old Goodyear building

“I think it was great,” Ward 1 alderwoman Joyce Arceneaux-Mathis said. “(They had) a lot of enthusiasm and a lot of great ideas.”

One resident at the meeting, Sarah Walton, had moved away for a period of time before returning to Natchez. Walton said she was encouraged by the ideas facilitated by the workshop.

“It’s nice to hear other people want our city to thrive like any other,” Walton said. “I’m excited to hear about the follow up on Tuesday.”

Walton was referring to the conclusion of the project’s second phase. After the consulting team evaluates the feedback from the workshop and integrates the information into a plan, they will display a “big-picture concept” of the plan to residents at 6 p.m. Tuesday at the convention center.

“Hopefully once this is all out on paper we can spur investment and get things going,” Ward 3 Alderwoman Sarah Carter Smith said.

“We really hope to have a great turnout and, again, keep people engaged,” Walker said.

After the meeting, Walker identified tourism as a main focus of the project, suggesting that an increased tourism presence could lead to an influx of residents.

“We’ve seen some communities that have focused initially on tourism, attract people, they find it appealing and they move there,” Walker said. “We need more bodies here, whether they are residents or tourists.”

Once phase two of the project concludes Tuesday, FOR Natchez and the consulting team will advance to phase three, drafting a detailed plan based on all information accumulated to date. Phase 4 of the project involves presenting a final plan to the board of aldermen for approval.

The final plan will replace a portion of the current, 18-year-old comprehensive city plan.

FOR Natchez President Chesney Doyle has said she hopes to complete the project by the end of October.