FOR Natchez group presents concept FOR the future 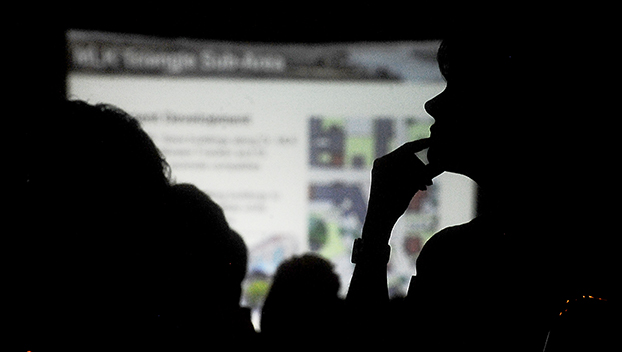 As the consultant team’s “first real stab” at assembling a plan, the concept included public feedback from a plethora of workshops and focus groups. That includes the public workshop held Thursday, when a diverse group of approximately 200 residents gathered to give input.

FOR Natchez President Chesney Doyle said she was happy with Tuesday’s gathering, which concluded Phase 2 of the four-phase revitalization project.

“I was very pleased. The turnout was a lot more than I expected,” Doyle said.

“Once again, we had a good demographic mix. We had young people, we had people in their 90s, we had a good African-American representation (and) we had property owners.”

Tuesday night’s meeting contained a vast amount of information about how the city can revamp the downtown, with the project focusing heavily on the bluff area and what planners call the “MLK triangle,” — encompassed by Martin Luther King Jr., East Franklin and Saint Catherine streets.

One of the main ideas highlighted in the concept plan was creation of a public amphitheater placed along the river under the bluff.

Lead consultant Phil Walker called the amphitheater proposal “the big idea” of the project, saying it could be used as venue for live music and entertainment.

The amphitheater idea heads a list of ideas that would “activate the river” as the consultants put it. Economic consultant Randall Gross said the Mississippi River alongside the bluff make Natchez unique, presenting an opportunity for the city.

The consultant team also listed the Broadway Street depot as one of the keys to utilizing the river.

Urban designer Lee Jones said the depot could be utilized partially as a restaurant, renovating the building with either a raised deck or a patio where visitors could eat.

Additionally, Jones said the depot could contain public restrooms, something the consultants said the bluff area needs based on public feedback.

Another potentially impactful suggestion was to construct a dock along the river. Walker said the dock, as construed in the plan, would accommodate up to three boats at a time.

Walker said the dock idea had great potential, as the cruise boat trade is a “growth market.”

Shifting to the MLK Triangle area, the team focused on the opportunity to establish the area as a cultural arts and entertainment district.

A main component of the plan involved live music and art as primary means of entertainment in the district. Gross discussed the possibility of creating a live music entertainment venue, while Moller proposed creating a “Natchez African-American Heritage festival” with music, food, merchandise and history and cultural talks.

Moller focused on the history contained by the MLK Triangle, noting former Zion Baptist Church the Rev. Hiram Revels —who became the first Black U.S. Congressman in history — and the Rhythm Night Club tragedy as examples.

Moller said the district could preserve and interpret that history through methods such as cultural art exhibits, creating smartphone “apps” or constructing special monuments.

Additional ideas and focal points presented in the plan include:

-An arts and design district surrounding the Ritz Theatre

-Fixing sidewalks throughout the city, which Walker said was the most-heard suggestion from public feedback

-Creating a public park in the open space at Martin Luther King Jr. and High streets

-Converting the MLK Triangle area into a public meeting area with green space, a plaza or a combination, and

The feedback from the public was mainly positive, as most residents who spoke at the meeting thanked the consultant team.

Natchez resident Earline Collins, who has been providing feedback since August, was one of those residents. She also gave a suggestion: implement programs to bring families downtown.

Collins said family-friendly programs would get parents to visit the city, spend money for their children and, potentially, uproot and move to Natchez.

Another resident suggested wiring downtown with fiber-optic cables to provide faster Internet service, a possibility Gross said the team had considered although it was not presented in the meeting.

Natchez resident Bob Adams, however, offered some criticism to the consultant’s propositions. Adams called some of the ideas, such as making one-way streets into two-way streets “ill-informed” and “short-sighted,” questioning their viability.

Walker responded to the one-way-streets critique by saying that evidence from other cities from across the country has shown that two-way streets help to limit speeding and make travel more efficient.

The project now moves to Phase 3, which is to integrate the feedback received tonight to create a draft of the final plan. Phase 4 of the project will be to present the final version of the plan to the mayor and board of aldermen.

Those with questions or who would like to speak with members of the consultant team can reach Doyle at 404-317-5524.