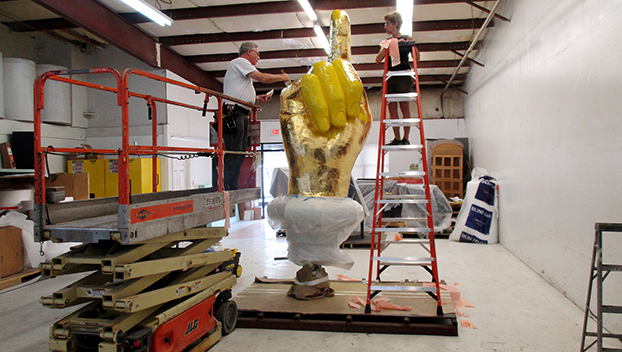 Artisans from the GIlder’s Studio apply gold leaf to the iconic hand that will be reinstalled on top of the Port Gibson Presbyterian Church’s steeple Wednesday. (submitted)

PORT GIBSON — The iconic golden hand pointing to heaven will soon be back on top of Port Gibson’s First Presbyterian Church.

For nearly two months, the Mississippi landmark has been in Virginia being repaired, refurbished and recoated with new gold leaf.

The church’s minister, the Rev. Michael Herrin, said the hand was taken down from the steeple on June 26. He said the hand will lifted back into place by crane at 9 a.m. Wednesday, weather permitting.

Herrin said the public is invited to come see crews install the hand on the steeple of the historic church.

The hand was taken down because much of the gold finish needed cleaning and repair from birds and the elements. The cuff at the bottom of the hand had started to rust, Herrin said.

The hand was last cleaned and coated with gold leaf in 1989.

After the hand was removed by crane in June, church volunteers took it to Manassas Park, Va., where the American Stripping Company removed the previous coatings from the hand’s exterior.

The company also repaired the rust damaged sections of the cuff and painted the entire exterior surface with epoxy paint.

The Gilder’s Studio from Olney, Md., came to the facility in Virginia to cover the hand with new gold leaf.

“This is the same company that recently gilded the eagle atop Mississippi’s capitol building in Jackson,” Herrin said.

Herrin said the current hand is the second to be atop the steeple.

“The first one was carved from wood, and was, we think, original to the structure when it was completed in 1860,” Herrin said. “The current hand was fashioned from sheet metal and first installed around 1903.”

Church member and television producer Irene Guthrie filmed the restoration of the hand from 1989-90, when scaffolding had to be built around the steeple to remove the hand for repairs.

Guthrie said employees from Gold Magnolias in Brookhaven reapplied the gold leaf to the hand. In previous years the gold leaf was painted on in place.

“I don’t know if (anyone from Gold Magnolia’s) is still around, but I’d hope they’d come back out to see the hand go up,” Guthrie said.

Guthrie said it took the Gold Magnolias a month to six weeks to put new gold leaf on.

Guthrie’s husband Shreve Guthrie, who is a church deacon, said this year’s restoration has been much quicker than in 1990.

“We were better prepared to take it down this time,” Shreve said. “It had less damage then what we originally thought so the repairs have gone quicker.”

Herrin said he looks forward to seeing people when the cranes put the hand back in its place on the church’s steeple.

For those who want to have their picture taken with hand before it is reinstalled, Herrin suggested they come at 8 a.m. to the church at 605 Church Street in Port Gibson.