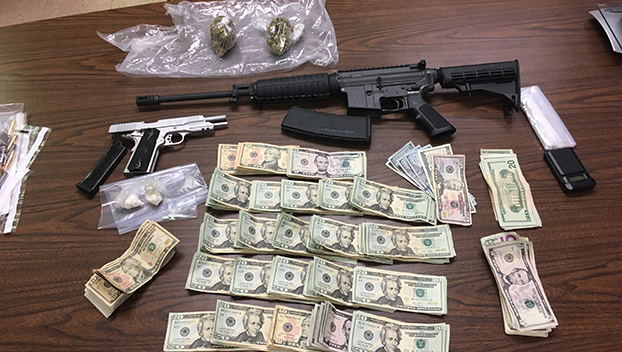 The sheriff’s office reported that their special operations group received a tip Saturday of possible drug activity at 203 Watts Avenue. The owner of the residence and her four children were not home at the time of the alleged activity.

When deputies knocked on the door of the residence, at approximately 11:30 p.m. the two alleged suspects, later identified as Kendrick Keshon Smith Sr., 25, 610 Old Washington Road, and Darren Denzal Washington, 25, 102 Sgt. Henry L. Brown Drive, reportedly fled from the living room towards the back of the residence.

Through a window deputies reported seeing an AR-15 rifle  on a chair directly in front of the door and marijuana, digital scales and cash on the living room table. After entering the residence, deputies reportedly also found a loaded and cocked Taurus 1911 pistol on the couch. Both weapons were allegedly stolen.

Deputies then located Smith and Washington hiding in a bedroom. Deputies reportedly issued several commands to exit the room before the two men complied and were taken into custody.

Washington received an additional charge of felon in possession of a firearm.