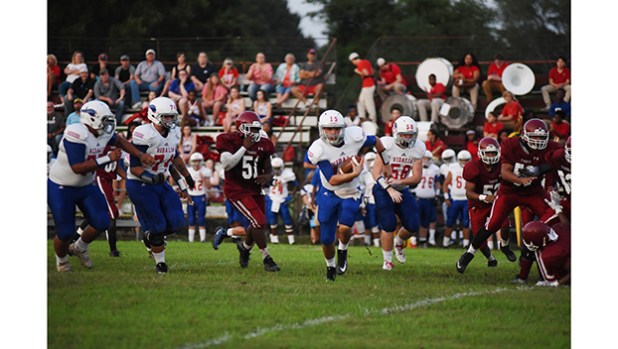 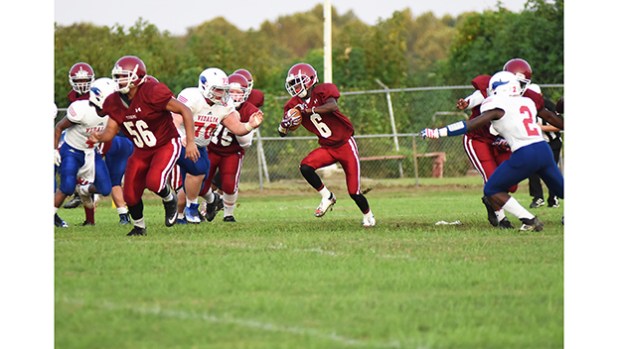 Sicily Island’s Tyrell Jordan rushes up the middle Friday during an LHSAA game against Vidalia in Sicily Island. (Reed DeSalvo | The Natchez Democrat)

Devin Green hauled in the opening kickoff and darted up the middle through a slew of defenders before outracing another to the end zone for a 70-yard touchdown.

And just like that, Dee Faircloth’s second stint as Vidalia High School head coach was off with a bang.

Tristan Weatherly ran for two touchdowns and threw for another and the Viking defense flexed its muscles all game long as Vidalia beat Sicily Island 34-6 to give Faircloth win No. 250.

“I was proud of them,” said Faircloth, who retired as Vikings coach in 2009 before taking the program over again this past spring. “The defense did a hell of a job. They swarmed everything, and that’s the way we’ve always played. That’s Viking defense — swarming one sideline to the other.”

The Vikings (1-0) defense held the Tigers to -1 yards in the second half and recovered three fumbles.

“In the third quarter they had the ball the whole quarter and put pressure on our defense,” Faircloth said. “But I was proud that we sucked it up.”

Sicily Island stubbed itself in the toe all night, fumbling the ball eight times and committing eight more penalties. Most of the Tigers (0-1) fumbles came on shotgun snaps.

“We had turnovers and fumbles, and you can’t do that against a big school like Vidalia,” Sicily Island coach Donald Money said. “They’ve got people that don’t go both ways. They’ve got an offense, and they’ve got a defense. We were digging ourselves out all night.”

Green led the VHS ground attack with 76 yards on 12 carries, including a 28-yard scamper through the middle of the Tigers defense for Vidalia’s final score with less than three minutes remaining.

Weatherly scored a rushing touchdown in each half, with his first giving VHS a 21-0 lead midway through the second quarter. The junior signal-caller also threw a 10-yard touchdown in the first to DeMikal McCoy to follow up Green’s kick return.

Weatherly finished 6 of 12 passing for 81 yards, but he also threw two interceptions. He finished the game with 43 yards rushing on nine carries.

Tyreke Tolliver led Sicily Island with 107 yards passing on 14 attempts, connecting with Tyrell Jordan on a 3-yard touchdown for the Tigers’ lone score.

“I’m proud of these guys,” Money said. “They’re head and shoulders above what they would have been last year.  We’re starting seventh graders. If we can keep the program going, they’re going to be beasts.”

Both teams will be on the road next week with Sicily Island visiting Block, and Vidalia traveling to face Delhi.

“We’re going to be alright,” Faircloth said. “We just have a lot of things that we’re going to have to clean up. But we’re proud of them, and we’re on to the next one.”