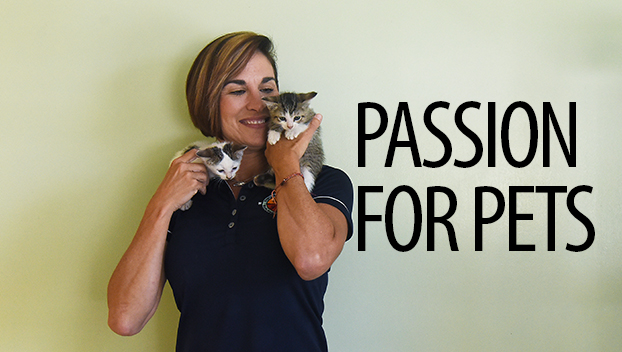 New Natchez-Adams County Humane Society shelter manager Lena McKnight holds two of the kittens that are up for adoption Saturday at the shelter. (Nicole Hester / The Natchez Democrat)

NATCHEZ — Lena McKnight is passionate about animals, and she has nearly 100 examples to prove it.

On Saturday, NACHS will host a meet-and-greet fundraiser to introduce McKnight to the community. The event will include tours of the shelter, kissing booths with puppies and a chance for residents to meet McKnight, who has volunteered at the shelter since she moved to Natchez 16 years ago.

Southside Market will provide refreshments for the event, which will be from 11 a.m. to 3 p.m. at the animal shelter on Liberty Road.

The meet-and-greet is a part of a wider attempt to encourage community involvement that includes a new social media strategy to draw in volunteers and prospective adopters, McKnight said.

This fall, McKnight said the shelter plans to host a Halloween party with animals dressed in costumes for the occasion.

“It amazes me how many people have not even been inside of our shelter,” McKnight said. “Let us give you a tour. Know where your dollars are going to work.”

NACHS president Robert Greene said despite having a large pool of candidates from as far away as South Carolina, the board took little time to choose McKnight because she was well-qualified, enthusiastic and passionate about the animals.

“We were able to make that decision quick,” Greene said. “We just couldn’t turn her down.”

McKnight has an associate’s degree in animal science and livestock health and is taking classes to become a veterinary technician.

Growing up in Georgia, McKnight was a member of the local Equine Rescue League. She was crowned Miss Rodeo Georgia in 1992.

When she moved to Natchez, she picked up three dogs, a pig, and four horses.

Her oldest son, Hunter Yarborough, recently graduated from Trinity Episcopal Day School and her youngest son, Sterling Yarborough is a junior at the Natchez school.

With fewer demands at home,

McKnight said she now can devote more time to the shelter.

“There are pros and cons to this job — it can make you really mad — but you just want to save them all,” she said.  “I think I can do a lot here.”

McKnight spends a part of her day performing medical care — treatments, shots and medications — for animals who come in off the street. The shelter receives at least one stray dog or cat a day — a testament to Natchez’s overpopulation problem, she said.

The facility cannot always take on the animals and, when room isn’t available, McKnight said she often has to ask people to keep the animals until space frees up. Sometimes the backlog becomes so heavy that a waiting list exists just to get the animal into the shelter.

Once in the facility, however, the animals are put in an observation room to watch for health ailments. After observation, healthy dogs and cats are placed in the shelter with other animals.

“These animals are very well taken care of,” McKnight said. “I want people to understand they’re not just getting a pound puppy right off the street.”

McKnight said she hopes the meet-and-greet event would show the community how much these animals need them, but she also hopes the event will draw in people — like her — who love the work.

“What’s my something? It’s animals. It’s always been animals,” she said. “It’s unconditional love. It just makes you smile every day.”