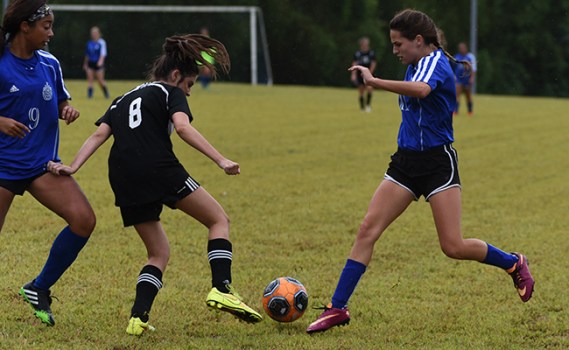 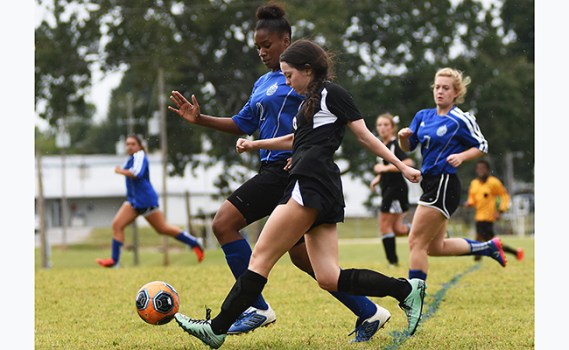 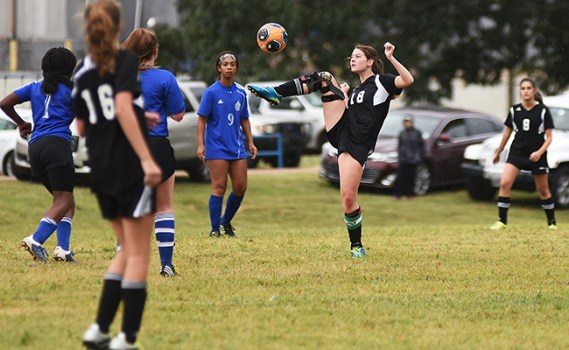 Cathedral’s Emily Hicks attempts to bring down the soccer ball during the match. (Nicole Hester | The Natchez Democrat)

“Hometown bragging rights were on the line,” Cathedral coach Dennis Hogue said. “They came out hard, and we came out hard. Whoever gets that first goal always seems to get the edge.”

Dupre led the scoring off late in the first half, and Moore then gave her squad some breathing room early in the second half.

ACCS, however, wouldn’t go away quietly.

Kacie Guedon shifted from her goalie post to a field position and quickly made an impact, applying pressure to the Lady Green Wave defense to force a penalty kick.

The senior then buried her attempt, bringing the Lady Rebels to within one, 2-1.

“A few missed opportunities here and there for our girls,” ACCS coach Jim Bob Allgood said. “We did more aggressive passing, trapping and work to get opportunities today than we’ve done in all of the games we’ve played this year.”

Just moments later, Foster blasted her shot to put her squad ahead for good.

“ACCS they always find a way,” Hogue said. “They just do not quit. I told my girls to stay on their toes the whole game and do not quit. We needed that cushion.”

The Lady Rebels put together a pair of late scoring chances, but the Lady Green Wave defense stood tall in staving them off.

“They started putting pressure, but we got calmer,” Hogue said. “We started passing the ball more and had more touches, passes and traps than what we had during the meat of the game.”

Allgood said despite the loss, he was pleased with his team’s effort throughout.

“I’m very happy that we were able to give them a fantastic match with such a young team,” he said. “There’s a whole bunch of eighth- and ninth-graders that stepped up today. Two different girls played in their first soccer game in their lives today.”

“There’s something about ACCS. Anytime someone scores on them, that just raises their intensity,” Hogue said. “There’s not a fatigue factor with ACCS, they just keep coming and coming. But all in all, this is exactly what I expected — a nail biter to the end.” 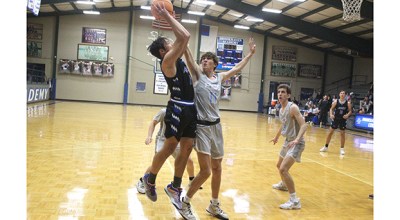 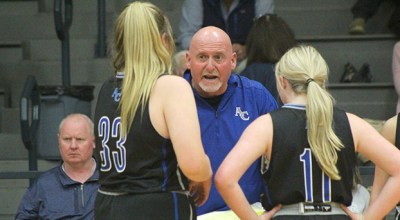 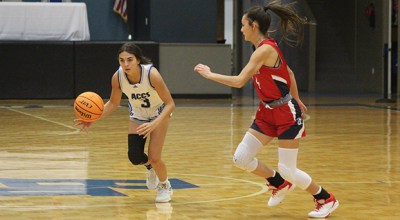