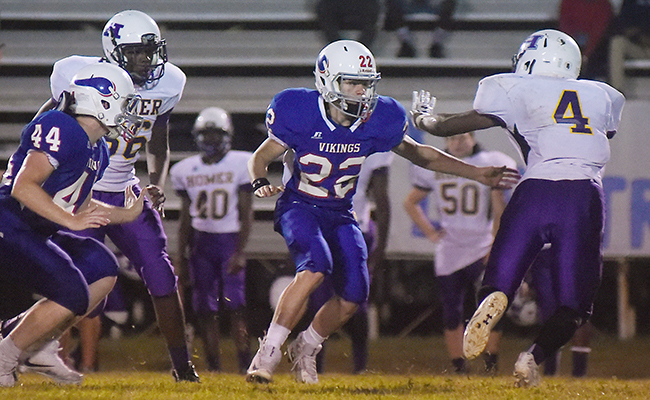 Vidalia High School’s Josh Marsaw was forced to watch his team last season from the sideline after a year of ineligibility.

Fully ready to go now as a senior, the 6-foot-3-standout athlete is making his presence felt.

Marsaw returned an interception 84 yards and scored another long touchdown after scooping up a botched snap on a punt to help Vidalia blow past Homer 42-8 in LHSAA football action Friday night.

“I told him, ‘You see what happens when you catch a ball? You can go with it and run,’” Vidalia coach Dee Faircloth said. “I was real proud of him. He did real good.”

The Vikings (3-0) dominated from start to finish in this one, scoring on their first five possessions.

The one time Vidalia was forced to punt, Marsaw picked up a bad snap that sailed over his head and weaved his way in and around tacklers and down the sideline for a 44-yard score.

“We practice him going back and getting it and then running real fast,” Faircloth said, laughing. “Shoot, I was going, ‘What the hell is going on out there?’ But that was a big play. It was (21-0), and they could have gotten the ball way down there. It may have been a different story.”

But Vidalia wasn’t going to let that happen on this night.

Quarterback Tristan Weatherly threw for 116 yards, including a 26-yard scoring strike to DeMikal McCoy. The junior signal-caller rushed for two more scores, and running back Devin Green had 10 carries for 74 yards. Green opened the scoring with a 2-yard burst up the middle to cap off a 14-play opening drive.

“When you have balance like that, that’s the greatest thing you can have,” Faircloth said. “I thought we had a great crowd, and the fans were into it.”

While the offense was churning out points, the Vidalia defense was keeping Homer offense at bay. The Pelicans (1-2) managed just two first-half first downs and scored their lone touchdowns with just over a minute to play in the game.

Vidalia led 35-0 at halftime after a 21-point second quarter. The Vikings outgained the Pelicans 314 yards to 126. VHS rushed for 198 yards in the game.

Vidalia will look to improve to 4-0 next week when it hosts Beekman.

“We’re real proud. The kids did a good job on both sides of the ball,” Faircloth said. “We moved the ball, and the defense did a heck of a job until right then at the end. I was proud of the whole effort.