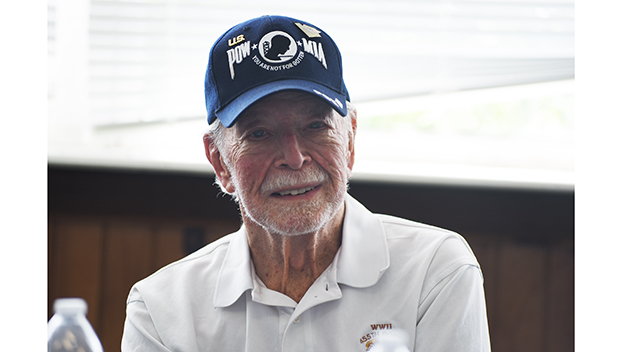 Robert “Bob” Mims is a World War II veteran and had Saturday’s tournament named in his honor. (Nicole Hester | The Natchez Democrat)

The Home with Heroes Foundation has served the local area for the past several years.

The four-man scramble was originally slated for a weekend in June, but was moved because of weather at the time.

“We have a ladies team and a total of nine teams out today,” tournament director Mark LaFrancis said. “We also have several veterans participating in the event.”

Home with Heroes Foundation is a private, nonprofit organization that helps raise money for local veterans.

“We’ve helped over 200 veterans in the area,” LaFrancis said. “Anything from emergency aid to clothing, food, rent or utilities. One hundred percent of the proceeds go to veterans and their families. They served our country. That’s their ticket.”

The tournament is in honor of former World War II veteran Robert “Bob” Mims. Mims was captured by Germans during active duty and was taken as a prisoner of war.

The 36-member field is down from last year’s number of 17 teams, but LaFrancis said that doesn’t mean the tournament wasn’t a success.

“We had great sponsorship for the event,” he said. “And that helps out the bottom line and helps make it a good tournament.”