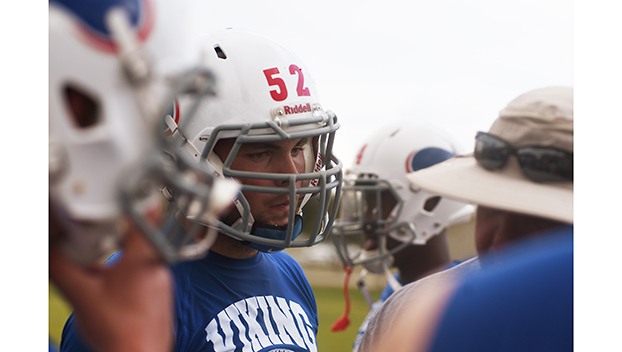 Vidalia High School had just run through Sicily Island, 34-6, leaning on Tyler Cupit and the rest of the offensive line to push through the muddy conditions in its 2017 season opener.

But then the clock struck zeroes, and Cupit feared his final year could be in jeopardy.

“I felt something in my stomach,” he said. “I just got really dizzy and light-headed. I was throwing up and eventually I had to go to the hospital.”

The Vidalia right tackle went to Riverland Medical Center in Ferriday, where he was diagnosed with second-degree heart block.

“I was so scared. I thought I wasn’t going to be able to play football anymore,” Cupit said.

Cupit was then airlifted to New Orleans’ Ochsner Medical Center, where the senior received some good news.

“They said that I didn’t have second-degree heart block,” Cupit said.

This wasn’t the first time Cupit has had to manage his heart condition after the 6-foot-1, 210 pounder was forced to miss his entire sophomore year.

“I have to drink a gallon of water and a gallon of Gatorade, and I have to eat right,” Cupit said. “If I don’t, then I’m down (dehydrated).”

When Cupit returned from New Orleans, he was determined to play that Friday night at Delhi.

“He came back that Wednesday and watched practice and said I’m ready to play,” Faircloth recalled. “I told him, ‘Do you have a Nintendo game? Because that’s all the playing you’re going to be doing on Friday.’”

But Cupit presented Faircloth with notes from doctors clearing him for Friday’s action.

“He’s tough as hell,” the grizzled coach said. “He talked me into playing, and he played that whole ball game.”

Vidalia (3-0) and Cupit ended up rolling past the Bears that night, winning 32-8, with several Vikings players honoring Cupit by donning his number on their uniforms, Faircloth said.

“The support for me was overwhelming. It almost made me tear up,” Cupit said. “I just love my teammates.”

Vidalia will look to keep its winning streak going this Friday when it hosts Beekman Charter School.

“I’m so excited about this team,” Cupit said. “We are chasing the (Superdome). Coach Faircloth, I love him to death. I’m really glad that I got the chance to be coached by the legend himself.

“Football is my sport, and I want to represent these boys right. It’s my senior year.”