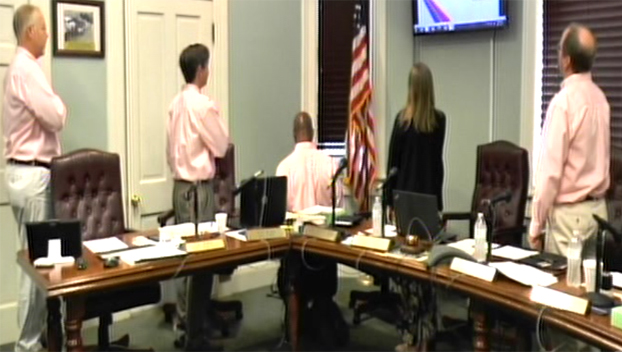 Adams County District 4 Supervisor Ricky Gray took a knee during the pledge at Monday’s meeting. Gray said he was kneeling to pray for unity in the community. (Photo courtesy Bruce Video Productions)

NATCHEZ — As Natchez Police Chief Walter Armstrong gave the Pledge of Allegiance Monday at the Adams County Board of Supervisors meeting, supervisor Ricky Gray faced the flag and knelt in prayer.

After the meeting, the District 4 Supervisor said he was praying for the community, as he had been doing during the prayer before the pledge.

“It is no secret we are divided as a community,” Gray said. “Every time I look up, I am hearing about things in the community about this group and that group. It seems like we are so against each other.

“I just wanted to kneel and pray for our community. The only way we are going to get to where we are going is through prayer.”

“This is real serious. If we don’t come together and stop all this, we are going to tear our community up.”

Gray said the community is not divided along racial lines because of the Natchez-Adams School District, but recent issues are causing more people to mobilize on black and white sides.

“My thought is this, at the end of the day, if it is not a win-win for the community, then we don’t need to be doing it,” Gray said. “We have a great community. We are not going to agree on everything. But we can’t have this closed minded, ‘this is how it is going to be,’ and it affect everyone in the community.”

During his supervisor reports, Gray will often talk about how divided the community is along racial lines and he asks the community and leaders to come together. Gray said people are not listening.

“In order to have unity in the community, someone has to do something,” Gray said. “I have been trying to bring attention to this in the community for I don’t know how long.”

Gray said he is not following in anyone’s footsteps on this.

“One of the main things my daddy used to tell me is when I follow someone, to make sure I know where they are going,” Gray said. “I did not follow nobody on this. I followed me.”

The public education system is a community issue, he said.

Gray said he knelt in prayer because he is passionate about his community and he wanted to do his part to bring the community and leaders to the table to find a solution.

“We all need to be at the table to find some solutions to the problems we are having in the community.”