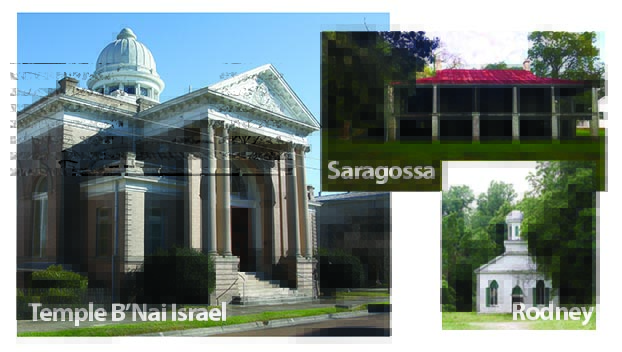 Three local sites have been listed on the Mississippi Heritage Trust's list of endangered properties.

NATCHEZ — Three sites in and around Natchez were placed on this year’s  list of the 10 Most Endangered Historic Places in Mississippi.

The Mississippi Heritage Trust chose the Temple B’nai Israel, Saragossa and the town of Rodney out of 19 nominees, Executive Director Lolly Rash said.

The task of the judges who determined which sites would be on the list, she said, was to decide which historic places were both worthy of preservation and currently endangered.

“They were all interesting historic places and all looking for advocates to save them,” Rash said.

The Temple B’nai Israel is the first synagogue on the list to date, Rash said, though there have been many places of worship.

Rash said she was particularly happy about the temple’s placement on the list because she believes renovating a place of worship can aid in rebuilding communities.

“I think it’s forward thinking,” she said. “The church has been a catalyst for revitalization in communities before.”

Nora Katz, director of heritage and interpretation for the Goldring/Woldenberg Institute of Southern Jewish Life, which owns the temple and nominated it for the Heritage Trust’s list, said she was excited to begin work on the building.

Temple B’nai Israel was completed in 1905 and built to hold approximately 350 people. Over the years, Katz said, that congregation has dwindled to approximately 10 during holiday services.

Katz said the institute’s plans center on making the temple more accessible to the public.

“It’s really in need of repairs,” Katz said. “Restoration should help us have it open more often to the public.”

The temple is currently only open on holidays and to tours organized through the institute.

First, Katz said, she would like to see a ramp constructed on the property to make the building wheelchair accessible.

Katz said she would also like the space to host more exhibits and events for the community.

The reason for Saragossa’s inclusion on the list, Rash said, is different.

Saragossa, an example of early vernacular architecture built before 1826, is currently in the care of an owner who has been absent for many years.

Rash said the reason this house is on the list is so “a home of historic significance, which is currently in a state of decay … can get into the hands of someone who cherishes it.”

The Historic Natchez Foundation nominated Saragossa for the list this year.

Trevor Brown, deputy director for the foundation, said he hopes the nomination will “spur the current owner” into renovating the property or selling it.

Varnish and paint was left incomplete on the building and though the roof is currently in good condition, Brown said he fears it may fail if not properly cared for.

“Any building left unattended will go downhill,” Brown said. “A truly significant piece of architectural history is just sitting out.”

Approximately 35 miles outside of Natchez sits a third nominee for the list. It is not a building or plantation, however; it is a town.

The town of Rodney was once blooming in the 1860s but declined rapidly after a swift change in the Mississippi River’s course.

Rodney was featured on the endangered list in 2003, too, but still has faced declining population, flood risks and building decay.

The Rodney Baptist Church, built around 1850, has been abandoned for years and is at risk of flooding.

“How do you deal with the fact that this Baptist church is in danger?” Rash said.

Following the publication of the list of endangered places,  Rash said, the group which owns Rodney Baptist Church, the United Daughters of the Confederacy, put the building up for sale.

“We applaud them,” Rash said. “Realizing the fact that there is a problem can be a first step.”

Rash said she hopes inclusion of these places on the list will galvanize communities and kickstart restoration projects across the state.

“Natchez has the opportunity to be a leader here,” Rash said. “We want to help people going forward to tell the story of Mississippi.”