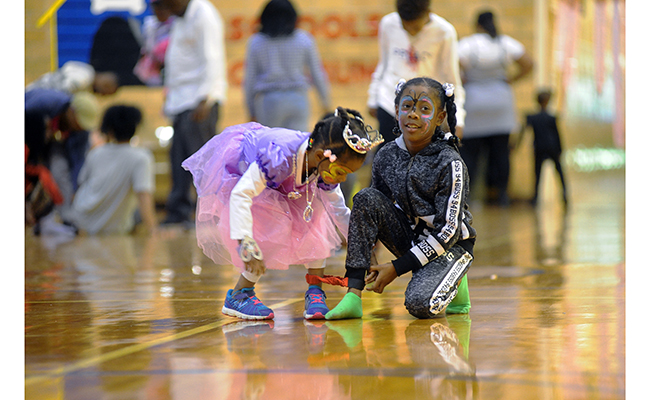 Addyson Watson, left, helps Necia Rice fix the band that held together the two during a three-legged race Saturday morning at McLaurin Elementary school in Natchez. The race was a part of a Halloween wellness event the school hosted to promote healthy living. (Emmalee Molay | The Natchez Democrat)

For its first ever Falloween Fun Run event, a host of young witches, superheroes and princesses came together Saturday morning at McLaurin Elementary School to promote healthy habits among everyone — no matter their character.

Led by McLaurin physical education teacher Frederick Todd among others, about 30 children began the wellness event with a mile run — in costume.

“We thought about a color run, but we knew Halloween was coming up. We had never heard of anyone doing a costume run, so we said we would try it,” Todd said. “We have a pretty good health and wellness policy at McLaurin. We try to abide by it — staff and students. This is just another addition to that.”

Following the run, the school’s event — open to all ages and schools — hosted a series of physical skill tests and drills, including a sack race, three-legged race, basketball shootout and pushup and situp contest.

Available in a separate room was also a hydration station, while McLaurin’s school nurse was available for blood pressure and heart rate screenings.

“We were a little reluctant to do it, but then we just decide we had to start somewhere,” Todd said. “Some of our kids are really taking charge with it, and we are trying to make sure they continue it, too. Being in the state of Mississippi, childhood obesity and diabetes is such an issue. If we can start them right young, it’s great.”

Todd said he is grateful to have a staff that allows him to put on events such as the fun run.

Along with his daily activities as a physical education teacher, Todd said the school also has a garden to promote healthy living.

“My bosses at the school are willing to let us do some things where we are able to grab ahold of the community. They let us try things, and it usually works,” Todd said. “The kids like a lot of things. They pretty much participate in everything we ask them to do, no hesitation.”