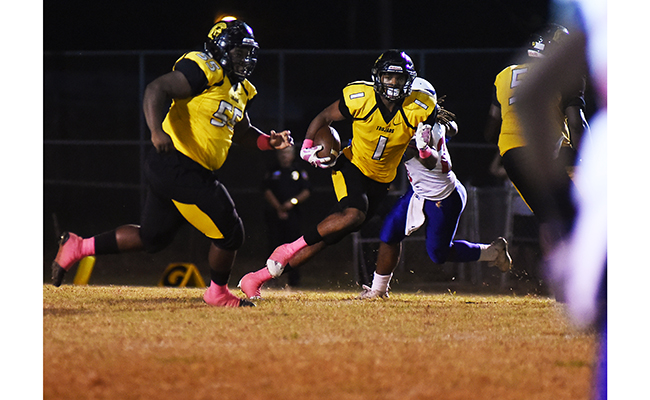 Ferriday high School’s Dantrieze Scott makes a move up field during and LHSAA football game against Vidalia on Oct. 13 in Ferriday. The Trojans travel to face Beekman Charter Friday, while Vidalia is set to travel to Delhi Charter. (Nicole Hester | The Natchez Democrat)

The Ferriday High School Trojans will travel to Bastrop, La. to take on the winless Beekman Charter School Tigers with the LHSAA District 2-2A championship at stake at 7 p.m. Friday.

Ferriday (7-2, 4-1) overcame less-than-ideal weather and field conditions at Melz Field, as well as a lengthy lightning delay, to take care of Delhi Charter 54-12 at the Trojans’ homecoming game last week.

Trojan coach Stanley Smith said that freshmen running backs Da’minya Milligan and Byron Milligan, as well as a tenacious defense stood out to him in the win.

“They (Da’minya and Byron) ran the ball really well. Defensively, it was a collective effort. No one player really stood out,” he said.

Smith said, however, most pleasing was his team’s positive attitude.

“We played hard. We stayed focused, even though it was cold and wet,” he said. “That was the first time all season we’ve had to deal with those (conditions). We came out and played ball. We got a big district win.”

With the win, Ferriday remains No. 8 in the Louisiana Sports Writers Association Class 2A poll, while it also moved back to the No. 1 spot in this week’s LHSAA Class 2A power ratings.

Beekman Charter (0-8, 0-5) is coming off a tough 22-14 loss at General Trass. The eight-point loss was the closest the Tigers have had since its season opener

on Sept. 1 at LaSalle High School — a heartbreaking 7-6 setback.

Despite not having won a game this season, Smith said the Trojans cannot take the Tigers lightly or for granted.

A win would give the Trojans the District 2-2A championship.

“It would be exciting for the kids. Something we would hang our hats on,” Smith said.

VIDALIA — After falling last week to Mangham, Vidalia High School is looking to bounce back in its final game of the regular season.

The Vikings are set to travel to Delhi Charter at 7 p.m. Friday in order to secure its chances at a home playoff game, as last week’s 21-7 loss put Vidalia at No. 7 in the latest LHSSA Class 2A power ratings.

Cam’Ron Randall scored the only touchdown for Vidalia in the loss on a 49-yard run.

Delhi Charter is coming off a loss last week to Ferriday, 54-12.

FERRIDAY — Delta Charter’s playoff seeding is at stake this week as it hosts Ouachita Christian for its final game of the regular season at 7 p.m. Friday.

The Storm is coming off a loss to Cedar Creek, 38-6, yet still remain the No. 13 team in the latest LHSAA Class 1A power ratings.

JONESVILLE — Block rounds out its regular season this week as it is set to travel to LaSalle at 7 p.m. Friday.

The Bears earned their second win of the year last week as they defeated University Academy, 24-14. Zorian Bowie rushed for 105 on 16 carries and one touchdown while completing 7-of-10 passes for 123 yards and another score in the win.

SICILY ISLAND — The Sicily Island Tigers are seeking their third win this season as they travel to Tensas at 7 p.m. Friday. 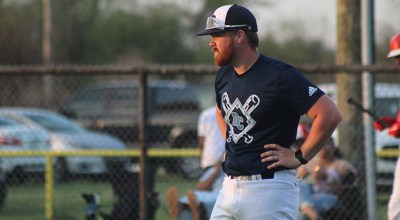