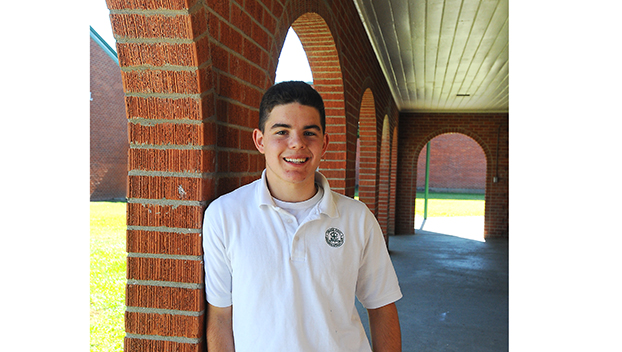 Cathedral High School junior Hayes Daly aspires to attend the United States Air Force Academy in Colorado. He wants to be a pilot in the Air Force. (Ben Hillyer / The Natchez Democrat)

NATCHEZ — Hayes Daly dreams of soaring above the clouds in an F-35 jet.

Right now, though, the Cathedral Day School junior has to do a little work while his feet are still on the ground.

The first step is to attend the United States Air Force Academy in Colorado.

“Then I’d be a pilot in the Air Force,” Daly said. “That’s the ultimate goal.”

Before attending the academy, he has to be accepted. For Daly, making the grades may not be an issue.

Daly credits his parents, Edward and Stephanie Daly, for his drive to keep all As in school.

“They pushed us as kids, and we got to the point where we wanted to do good and pushed ourselves,” Daly said. “Now, my parents don’t even look at my report card. They just expect me to do good.”

When Daly signed up to take the ACT test, Daly said he was not too worried.

He wanted to take the exam several times and said this first test would just be a trial of sorts.

“I was talking to my mom and she said the only text she got from me that day was ‘It was hard,’” Daly said. “I was thinking I wasn’t going to do that good, so I was really happy.”

Despite his high score after only his first try, Daly said he wants to take the ACT again in April — he feels he can do better.

In leadership, too, Daly, who is class president for the second year in a row, said he wants to stand out.

He is also the vice president of his youth group at Jefferson Street United Methodist Church and has been on the Cathedral Science Olympiad team — which went to the national competition after winning state last year — for several years.

Daly said his platform for class president — a promotion of unity among students — touches on a subject dear to him.

Daly said he loved Natchez — he loves the friendly atmosphere and the bonds he has made at Cathedral — and he wants that sense of family to continue after he has graduated.

“The student body is very close-knit,” Daly said. “At a bigger school, you don’t know anybody. Here, you just walk down the hallway and know everyone by name.”

That unity, he said, is something he will miss when he moves to college.

“Going to college and not knowing anybody will be tough,” he said.  “Yeah, I’m going to miss Cathedral.”

The change is worth it, however, if he gets to achieve his dreams, he said.

“Growing up, I always loved planes,” Daly said. “Hopefully, I never give up on my childhood dreams.”

Though it is still a long way away, Daly said he can see himself retiring in Natchez with family and friends all around him.

Natchez people, he said, are the best people. But he has a lot to do before he comes back.