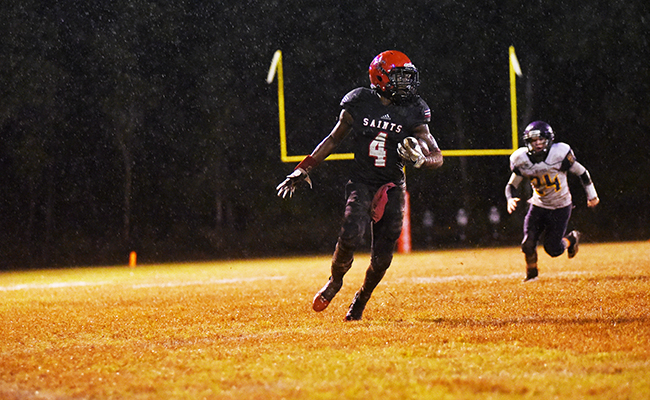 NATCHEZ — The Trinity Episcopal Saints will take a four-game winning streak into the MAIS Class A State Playoffs when they host the Desoto School Thunderbirds in a first-round game at 7 p.m. Friday.

Trinity Episcopal (5-5) earned the No. 2 seed after beating Union Christian Academy in a drenching rainstorm 18-6 last Friday night while winning the outright District 3-A championship.

“It was a good team effort. Jakarius really stepped up for us for sure,” Saints coach Graham Roberts said.

However, it didn’t take very long for Trinity to go from celebrating winning its first district title in three years to getting prepared for its first-round opponent.

“We take everything one game at a time. We took a few pictures after the game and then immediately we started to focus on DeSoto,” Roberts said. “We didn’t know until Saturday who we were going to play. On Sunday we had film session and started breaking down the team.”

DeSoto School is the No. 7 seed despite going 3-7 overall and 0-3 in District 1-A. The Thunderbirds are going in the opposite direction of the Saints with a four-game losing streak after being shut out by West Memphis Christian School, 49-0.

Roberts added that despite not winning a game in District 1-A, he is not surprised the Thunderbirds made the playoffs.

“They’re in the toughest district in the state in Class A. They played some teams really close,” Roberts said.