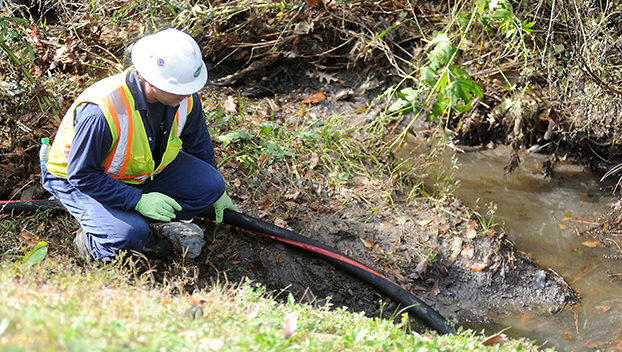 Hazardous materials crews work the scene of a gas spill at the intersection of U.S. 61 and Mississippi 24 in Woodville Friday morning. A worker from Triple E sets a suction hose into a ditch to collect the contaminated water from nearly 900 gallons of gasoline spilled at a convenience store. (Clara Turnage / The Natchez Democrat)

NATCHEZ — Portions of U.S. 61 and Mississippi 24 in Woodville were closed Friday morning after a truck transport tanker spilled approximately 900 gallons of gasoline at a local convenience store.

By midday, most of the closed roadways were reopened, local officials reported.

That section of roadway, between Flick’s Gas Station and Treppendahl’s Super Foods, is where the majority of the gasoline flowed after spilling from a Buffalo Services tanker early Friday morning.

“It was a high risk for anybody in the area,” Stewart said. “Thank God we had no trouble.”

Stewart said it was unfortunate that the spill happened at the beginning of the month, when many residents receive paychecks and go shopping.

“I hope the businesses understand that it’s a safety precaution,” he said.

Lane McCarty, division manager for Buffalo Services, said he believed a lever on the hose which connected the truck to the gas station’s tank was not secured, causing the hose to detach and spew gasoline onto the pavement.

Flick’s Gas Station is located on a slight incline, and when the gas began flowing from the truck, it ran into a storm drain, Stewart said.

The drain flows beneath the block of Mississippi 24 that is still blocked off and into a nearby ditch, where employees of Clean Harbors, a hazardous waste disposal company, were vacuuming up the spill.

Raymond Gaude, senior project manager for Clean Harbors, said the water taken from the ditch would be taken for testing and disposal.

Gaude also said the ditch would be excavated and recovered in soil so that any gasoline which soaked into the ground surrounding it would also be removed.

Stewart said ditch removal had not yet started and it would likely take several days.

The spill was first reported around 3:55 a.m., Stewart said. After receiving the call in his home, Stewart said he went to the scene and began notifying state officials such as the Mississippi Department of Environmental Quality, state highway patrol and local fire departments.

Assistant Chief of the Woodville Fire Department Clevone Palmer said officials believe the driver left the pump running and went to the front of the truck, meaning he or she did not notice the spilling gas when the hose first became unhooked.

Flick’s Gas Station, where the spill occurred, is one of four service stations at the intersection of U.S. 61 and Mississippi 24 in Woodville, which is the largest thoroughfare in the town.

When the fire department was called, Palmer said, they began setting up a half-mile perimeter and blocked traffic from entering the intersection.

Palmer said the traffic blockade was necessary because “any cigarette or match” could cause a fire.

Police officers and fire department officials covered pools of gasoline that had not flowed into the storm drain with sand and swept the dirt into bags, but it didn’t stop the fumes from spreading.

“You can smell the gas from here,” Palmer said from approximately a quarter of a mile from the spill.

Drew Pierson was just getting to work at the Three-Way Back Porch service station around 4 a.m. when he saw the driver and the gas across U.S. 61.

“I saw that poor fella with his tanker,” Pierson said. “He was just waiting.”

Pierson said Stewart advised him not to open the store that day.

“Which is too bad,” Pierson said. “I was sure planning to sell some biscuits today.”