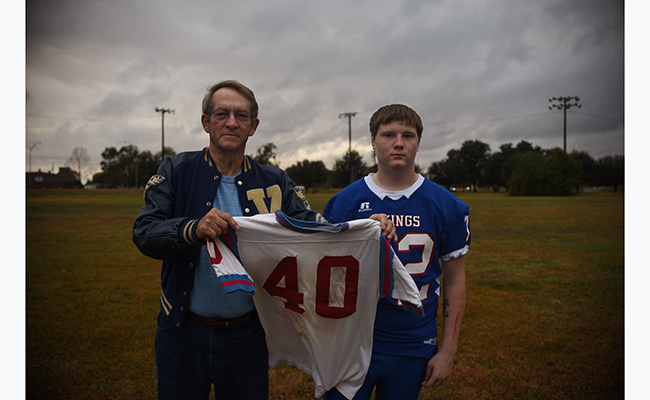 Vidalia freshman Dakota Townsend, right, stands with his grandfather, Wilbur Nations, as he holds his Viking football jersey from the 1960s. Townsend played the majority of this football season for the junior varsity team as a defensive lineman, while also contributing to the varsity team on special teams. Nations played halfback as well as a punt and kickoff returner for Vidalia from 1961-64. (Nicole Hester | The Natchez Democrat)

When Wilbur Nations played for the Vidalia High School football team in the 1960s, he wasn’t exactly the biggest or strongest member on the field.

Watching his grandson play on the same field more than 50 years later, Nations said the best part is to see Dakota Townsend do what he couldn’t do.

“I like to see him hit the other guys — knock them down, run over them,” Nations said. “I couldn’t ever run over them like he can. I was about 140 pounds soaking wet.”

Townsend, a freshman, has played the majority of this year for the junior varsity team as a defensive lineman, while also getting playing time on the varsity team on special teams.

He continues the tradition his grandfather began playing for Vikings from 1961-64 as a halfback and cornerback, as well as a punt and kickoff returner.

Recently, memories came flooding back into Nations’ mind when his wife, Liz, found his football jersey in a box of old things the family thought had not existed anymore.

The Nations, Liz said, lost a bulk of personal items in a house fire in 1970, and said they haven’t seen the jersey in years.

“I couldn’t believe I found it and it wasn’t falling to pieces,” Liz Nations said. “It has some stains on it, and I was too fearful to wash it. I thought it might disintegrate. How it survived, I don’t know.”

Wilbur Nations agreed he was surprised to see the jersey still intact.

Wilbur Nations said he and his wife make it to games to watch their grandson play football when they can and added it has been more than rewarding to see the family tradition continue.

“To know you played on the same field, it’s great,” he said. “The stadium is pretty much the same, and I love to see him repeat some of the things I did.”

Townsend said while he isn’t sure how much time he will receive playing on the varsity team next year, it is nice to have the support.

After a win Friday night over Delhi Charter to end their regular season, the Vikings (8-2) await playoff seeding for the coming week.

During his time, Wilbur Nations said what he remembers most at Vidalia was the rivalry with Ferriday.

“It was always a big exciting game,” he said. “We weren’t there this year, but we were getting updates. That made me smile.”

Ultimately, as Townsend continues his athletic career, Wilbur Nations just wants what is best for his grandson.

“I’m hoping he stays with the program,” he said. “And, keeps up his grades.”

Townsend, too, is excited for the future.

“I can’t wait to get to the playoffs,” he said.