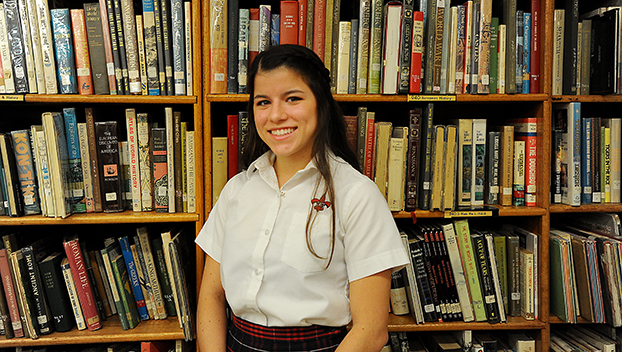 Trinity Episcopal senior Anna Rodriguez continues to look for many ways to express her love for leadership. (Clara Turnage / The Natchez Democrat)

NATCHEZ — Anna Rodriguez said she decided early she wants to be a leader.

The drive to lead, she said, comes not from her own desire to influence, but her wish to represent those who cannot represent themselves.

“I like to not only make my voice heard, but I like to make the people who don’t think they can share their voice or feel like they’re intimidated by other people in leadership feel heard,” Rodriguez said. “I want to help them.”

Rodriguez said her love of helping others manifests itself in many ways, from trying to to coax younger children into joining clubs and sports and teams to making decisions about the future of her school as Trinity’s Student Council president.

“I like to do every extracurricular I can,” she said. “It kind of stresses me out a little bit, but that’s the way I like it.”

As she readies to enter college and the world beyond, Rodriguez said she is looking for opportunities to express that love of leadership.

“My morals are a big part of who I am and what I believe,” she said. “In college and afterward, I’d love to take part in community organizations that follow those morals.”

Though Rodriguez said she is not particularly passionate about politics, she is interested in the way politicians can influence communities.

“I don’t want to say that I’m going to be in a leadership position for the rest of my life, but I’d like to work my way up to it,” Rodriguez said. “It doesn’t start out that way.”

Rodriguez recently sent her application to Vanderbilt University in Nashville, but what she hopes to study is still a little unclear.

She is drawn to international relations and astrophysics, but in a change of heart she changes again.

“Who knows? Maybe I can do some environmental engineering and come back and make Natchez a solar-powered town,” she said.

Rodriguez said she loves many things. She likes reading sci-fi and Jane Eyre, watching Neil DeGrasse Tyson videos on Youtube, and traveling with her parents, Jack and Linda Rodriguez.

Each of these loves pulls her in a different direction — should she study astrophysics like Tyson? Or should her love of traveling guide her to a life in international relations?

“I always tell people. They ask me (what I want to do when I graduate) and I tell them, ‘You won’t get an answer,’” she said. “It’s all over the place.”

Where she is going may still be ambiguous, but Rodriguez knows she is leaving soon.

And when she goes, she said she would miss the community she has grown to lead and love here in Natchez.

“Trinity is just a community in itself,” she said. “You always hear ‘the Trinity family’ but oh my gosh, it’s so true — and I’m going to miss it.”