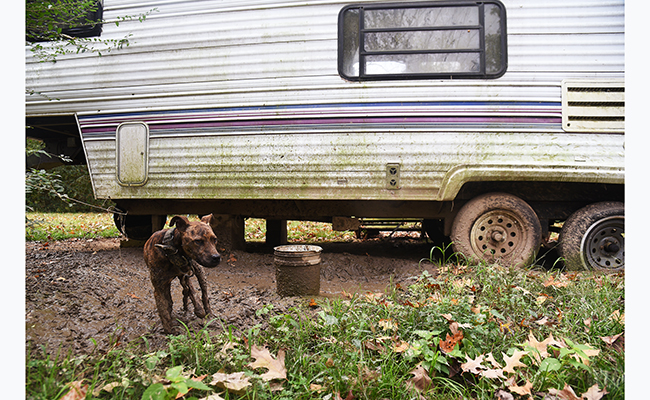 One of the dogs covered in mud and missing the front left paw walks on three legs while being chained up to a trailer on Tommie Queen’s property Tuesday in the Cranfield community.

NATCHEZ — A GoFundMe account created to benefit the animals seized after the discovery of a suspected dog-fighting operation Tuesday has raised more than $11,000 in just three hours.

“I’m so thankful,” Adams County Sheriff Travis Patten said. “I hope and pray we can reach our goal.”

The Adams County Sheriff’s Office began asking the public for help Tuesday after discovering more than 56 dogs on a property in the Cranfield community outside of Natchez.

The dogs, many of which were injured and left without access to food or water, were too numerous for the Natchez-Adams Humane Society or rescue centers in neighboring counties to take on, Patten said.

“Like I’ve said, until punishment for animal cruelty is increased, we’ll continue to find animals like these in the future,” Patten said. “We need to be able to care for them. I’m thankful for the help we’ve received, I just hope it continues.”