Officials working to handle challenge of caring for dozens of dogs 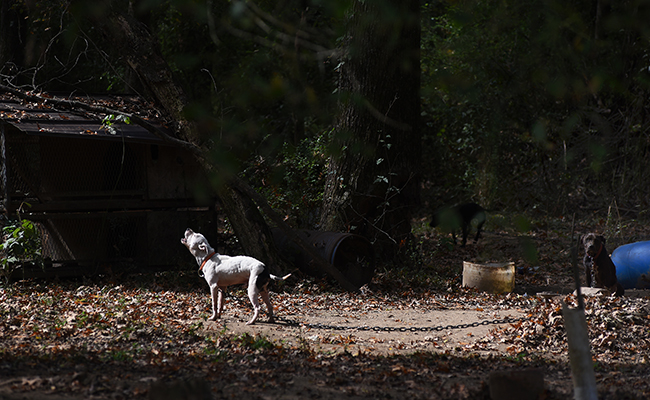 Overlooking the scene where several dogs are chained up within feet of one another, some of which are unable to reach water.

NATCHEZ — Sheriff’s deputies were still working Wednesday morning to handle the enormous challenge of caring for dozens of injured dogs discovered Monday night as part of a suspected dog-fighting ring.

Responding to an anonymous tip of a potential dog-fighting ring deputies discovered nearly 60 living animals and the remains of dozens more.

Since the discovery, six of the living dogs had to be euthanized, Adams County Sheriff Travis Patten said early Wednesday.

“Their injuries were so bad they could not recover,” he said. “Others had wounds that insects had laid eggs in and they were basically being eaten alive.

“It’s a disheartening situation. Even if you’re not an animal lover, seeing this will do something to you, it tugs at your heartstrings.”

The Natchez-Adams County Humane Society is housing 10 of the adult dogs and two puppies, Patten said.

Thirty-two dogs remain at the site and are being guarded by sheriff’s deputies.

Several other animals have died on the site shortly after investigators discovered the site, Patten said.

Patten said in addition to the dogs that died after they arrived, investigators have counted at least 25 dog skulls on the property as well.

Savant was going to the site Wednesday morning to examine the remaining dogs and potentially offer certificates of health, a requirement Patten said for transporting and housing the dogs off site.

“I cannot thank that guy enough for stepping up to the plate,” Patten said.

“We appreciate the people who have been calling and sending food and donations,” he said. “We were definitely not equipped for this type of seizure, but we definitely have the heart to do this and this community has the heart for this, too.”

The sheriff’s office has  set up a GoFundMe account due to a number of people out of town seeking to make donations using a credit card to help pay for the care of the seized animals.

The sheriff said he hopes the county may eventually be able to construct some type of housing to handle such abuse cases in the future.

“The dogs are like evidence and it’s on the sheriff’s office to fund this, and we don’t have any funds in the budget for this,” he said. “We still need monetary donations.”