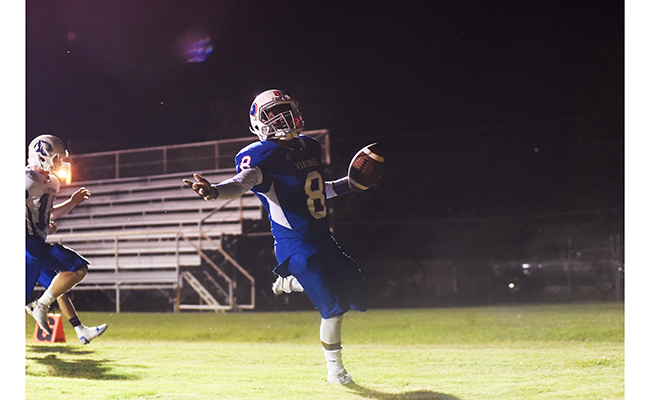 Vidalia High School running back Devin Green makes his way to the end zone during an LHSAA football game on Sept. 22 against Beekman Charter in Vidalia. (Nicole Hester | The Natchez Democrat)

It’s been a while since Vidalia High School has had a playoff game — certainly not one a player on this year’s roster can remember.

Entering the first round of the LHSAA Class 2A postseason tonight, the Vikings are set to host DeQuincy at 7 p.m. in a game that could further reestablish their image as a program.

“There ain’t nothing like playoffs,” Vikings coach Dee Faircloth said. “The best part is knowing that you have fought through the season and are one of the elite teams that made it.”

“Being No. 5 out of 32, nothing beats that. I guarantee that means a lot, too,” Faircloth said. “I told my kids we have a lot to uphold, though. Upsets happen, and we don’t want it to happen to us.”

Vidalia made its way to the playoffs under the leadership of Faircloth in his first year as head coach since a stint from 1968 to 2009.

The Vikings also dropped down a classification this year, entering District 2-2A — of which six of seven teams made the playoffs.

“We came into it, and I thought it might be better than the (Class) 3A district we were in. It turned out it was worse,” Faircloth said. “We have the best district in the state, so it hasn’t been easy.”

Vidalia ended its regular season last week with a win over Delhi Charter, 28-20.

After a less than perfect victory, Faircloth said his team has a different attitude this week.

“We were flat last week. We knew we were in the playoffs, so I think they kind of just went through the motions,” he said. “We have had a good week of practice. The kids are flying around, more so than they were last week, and I think they have a pep in their step. It’s playoff atmosphere.”

To avoid what Faircloth thinks would be an early exit from the postseason, he said his team simply needs to stay calm.

“A playoff team is a playoff team,” he said. “DeQuincy has a young ball club, and they are real excited. We need no mistakes. You can tell right off the bat if your kids are ready or not. We just have to go out there and play our game. It’s going to be great, and I hope we win.”