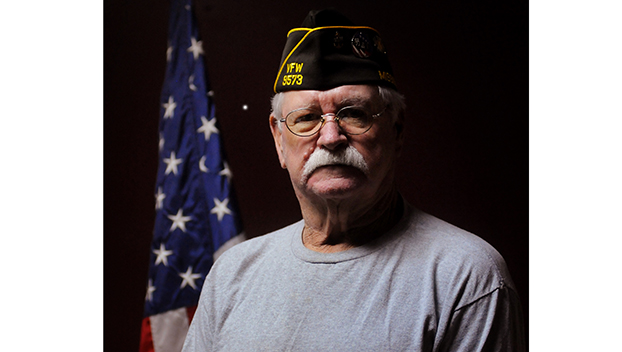 Clark Jackson served as a firefighter in the U.S. Navy. Jackson worked on the U.S.S. Twining, a World War II-era destroyer.

Never turn your back on a fire — that is the most important lesson Clark Jackson said he learned as a firefighter in the United States Navy.

When Jackson was just a recent high school graduate who had decided to join the Navy to follow in the footsteps of his older brother, the lesson was a literal one.

A fire, he said, will surprise you. A blaze will burn hot and fast and, if you turn your back, the fire can catch you.

Keeping a wary eye on the flames can save the lives of firefighters, especially in the close quarters in which Jackson worked on the U.S.S. Twining, a World War II-era destroyer.

Now, however, the advice takes on a new meaning. Turning your back on the things that scare you, he said, can be more dangerous than facing them head on.

He has learned this lesson well in his 74 years.

Jackson was born in Gloster in 1943, but moved with his family to Natchez when he was just 3 months-old. He has called Natchez home all of his life.

Jackson was one of 11 children and graduated from Washington School near Jefferson College in 1961.

Immediately after graduation, Jackson followed the footsteps of his older brother into the United States Navy.

After a 16-week firefighter school, Jackson boarded the U.S.S. Twining.

The U.S.S. Twining patrolled the waters in the Taiwan Strait near Vietnam. Jackson said the ship had to fire its artillery in several situations.

Jackson’s job was to ensure those shots, and any gunfire the ship might sustain, did not cause a fire onboard.

Perhaps the most dangerous situation Jackson found himself in was after he left the U.S.S. Twining.

Jackson was stationed in the Gulf of Mexico during the Cuban Missile Crisis, a 13-day standoff in October 1962 when the Soviet Union installed nuclear-armed missiles in Cuba, just 90 miles from the United States.

At the time, however, Jackson said he did not know anything about the nuclear deadlock, he was simply going where the Navy told him to go.

“The only time we heard anything about it was when we got back to the beach,” Jackson said. “We had no idea we were in there.”

Looking back now, Jackson said the situation was much more dangerous than he understood even when he landed after the standoff had ended.

“That was a dangerous time,” he said. “That’s the closest I ever want to come to nuclear war.”

For the most part, however, Jackson said he has fond memories of his time in the Navy.

“I had a ball,” he said. “You got to travel. You grow up in Natchez and you get to travel?”

Jackson traveled to Hawaii, Japan, the Philippines and Hong Kong. He said his favorite portions of his travel were those in China.

Sometimes, he said, he wishes he had stayed in the Navy longer. But if he did, he may never have met Marilyn.

In the spring of 1963, Jackson was discharged from the Navy and he returned home to Natchez where he joined the Natchez Fire Department.

In early 1964 in Ferriday, he met Marilyn Taylor.

“Six months later, we got married,” Jackson said. “I couldn’t help it. I fell head over heels. You’ve got to, if you’re going to stay together for 53 years.”

Jackson said he loved everything about Marilyn: how thoughtful and compassionate she was, how beautiful.

They raised four children — Clark Jr., Bryan, Carrey and Eric — in their house in Natchez.

Jackson stayed in the fire department for four years before moving to Armstrong Tire and Rubber Company.

When Titan Tire, the former Armstrong plant, shut down, he began working at International Paper’s Natchez mill. When the paper mill shut down, he retired.

Things have changed in Jackson’s lifetime. Businesses he used to love have closed; the fire stations he worked in have all closed down.

He joined the Veterans of Foreign War in 2005 to find people like him — people who remember the old days.

Jackson said he likes the work; he likes helping people and being a part of a community.

“We have a lot of veterans here that need help,” Jackson said. “If you don’t get involved and they need help, who will they turn to?”

In all the turmoil of a changing city, he said, having a community that remained the same has been nice.

This summer Jackson faced a change he was not expecting.

“I lost my wife in June this year,” Jackson said. “I haven’t gotten over that yet.”

Jackson has faced war. He lost two fingers to a wood saw while building a church in Natchez. He once fell more than 12 feet through the roof of a burning building into the bedroom below. He had known pain. But losing Marilyn, he said, was something else.

“It’s the hardest thing I’ve ever been through,” Jackson said. “We were married 53 years.”

Jackson said he would not let his grief consume him, no matter how difficult it becomes.

Like other hardships in his life, he wants to face this head on.

After all, he has never turned his back on a fire.