Possibilities opened up during tour of vacant Miss-Lou properties 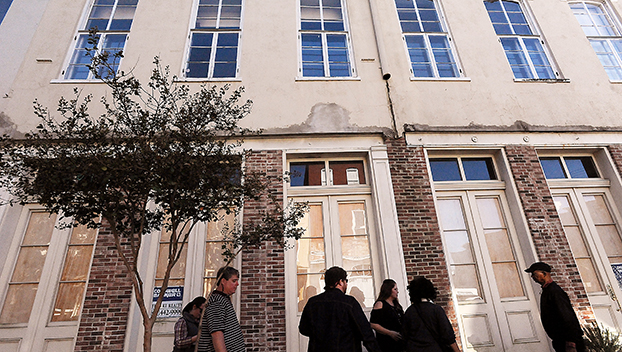 Residents and people from out of town toured some of Natchez’s vacant properties during this year’s Possibilities Tour. (Ben Hillyer / The Natchez Democrat)

NATCHEZ — Downtown Natchez has vacancies left and right, but Saturday marked a time that displayed all the “possibilities” downtown has to offer.

The Possibilities Tour aims to turn “deserted spaces into dynamic places” on both sides of the river. From 1 to 5 p.m., seven properties in Natchez and five properties in Vidalia opened their doors to interested visitors, allowing them to envision whatever aspirations they may have for the buildings.

The tour is a joint effort by Alcorn State University, Natchez Inc. and area Realtors.

One such realtor, Charlotte Copeland of Century 21, had a couple properties along the tour: one each on Main and Franklin streets.

“I always look forward to it,” Copeland said. “We always get a good turnout … it shows the interest in downtown.”

Copeland said within just half an hour of the tour she had already met “two really great prospects” interested in moving downtown.

One man on the tour, Al Walker, said the effort has paid dividends just four years after its inception.

“There have been some things that sold as a result of this tour,” Walker said.

The people going along the tour could have interests that run the gamut — from aspiring business owners to residential living.

Hickombottom, a native Natchezian, said she moved back home after spending years out of the state while she earned her master’s degree and even started her own non-profit.

“I always wanted to come back home,” she said.

Now, Hickombottom wants to create a school that teaches all the practical applications that are essential in life yet, she said, often overlooked.

She envisions a school with courses on business development and life skills. Lessons could even include learning how to fill out a job application, something with which she has seen students struggle.

“That (kind of school) is something this area really needs,” she said.

The possibilities tour at least gave her the opportunity to scope out some properties and try to get creative.

“I’ve been watching, just looking for the right opportunity.”

The properties themselves also represented a wide variety, from upscale apartments to the Kimbrell Office Supply building.

And many of the properties not only informed prospective buyers about the building’s specs, but also provided information about historic rehabilitation tax credits. These credits are offered depending on the building’s intended use and could save prospective owners thousands of dollars.

The consensus from both those walking the tour and those working it was that the Possibilities Tour provides a rare opportunity to showcase downtown.

While Walker, as well as fellow Natchez resident and first-time tour-goer Stacey Carden, had one recommendation, they agreed the tour is overall a very positive experience for the city.

“They need to be more prepared … but it’s a great effort. It’s a wonderful way to see buildings and properties you wouldn’t normally get to see.”