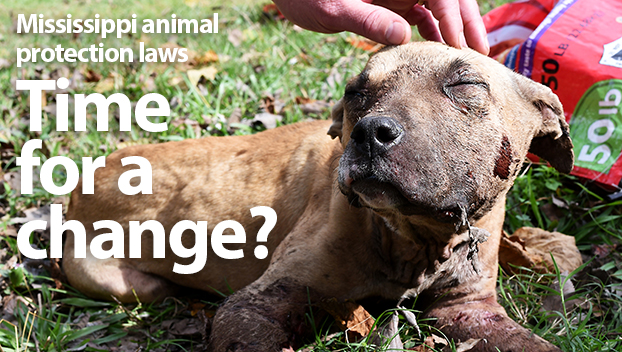 Editor’s note: The following article contained information that was incorrectly provided to The Natchez Democrat regarding whether the Natchez-Adams County Humane Society (NACHS) would continue to care for dogs found at the scene of a suspected dog-fighting operation. The NACHS released all dogs into the care of the American Society for the Prevention of Cruelty to Animals (ASPCA).

Dogfighting in the state is nothing new, but after the discovering more than 50 pit bulls last week chained up in various states of neglect and injury, some officials say they might finally have the ammunition needed to push stronger animal protection laws through the Legislature.

Sen. Bob Dearing, D-Natchez, has sought clearer and better laws regarding animal cruelty for many years, but to little avail.

Dogfighting has a law of its own in Mississippi and carries a one- to three-year prison sentence with a maximum bond of $5,000 per dog.

“What’s so ironic about this is that there’s already laws on the books — been there for years and years and years — concerning farm animals,” Dearing said. “You cannot (have) inhumane treatment against a farm animal. It’s a felony if you do so.”

Malicious or mischievous injury to livestock is a felony punishable by a fine of between $1,500 and $10,000 and a jail sentence between one and five years.

But the state’s laws protecting domesticated cats and dogs distinguish between simple cruelty, a misdemeanor, and aggravated cruelty, a felony. Under the Mississippi Dog and Cat Pet Protection Law of 2011, intentionally or negligently wounding, depriving of shelter, food or water or cruelly confining a dog or cat could face the misdemeanor charge, which with a guilty finding carries a fine of no more than $1,000 and a prison sentence of up to six months, or both.

Only intentional torture of a dog or cat is deemed a felony. If guilty, the offender would face a slightly stiffer fine — up to $2,500 — but the maximum sentence remains at six months.

More than a slap on the wrist

From law enforcement officers’ perspective, the division between a felony and misdemeanor cruelty charge places a great burden of proof on officers and little to deter criminals from animal cruelty, said Karren Ewing of the Adams County Sheriff’s Office.

Ewing’s official title with the sheriff’s office is sex offender registrar, but Sheriff Travis Patten calls her the animal cruelty expert. On every case concerning animal cruelty, Patten said, she is the first person he calls.

In her experience in animal cruelty cases, Ewing said she and officers often face the same frustrations.

“The thing is, (the law) is so lax,” she said. “When you walk on a scene like we did with so many animals lying there injured and dying, without proving that he’s fighting them, all we have is a misdemeanor.”

Often, Ewing said, this means the work she and other officers do only results in a minor fine for even suspected dogfighters.

“Most of these guys, they know this,” she said. “They know it doesn’t matter unless we catch them doing it. What do they care? A misdemeanor charge for $500? No judge around here has ever put anybody away for that.”

Unless real consequences are put into place for dogfighters, Ewing said, nothing will deter the perpetrators from continuing.

“If you don’t walk up on them fighting, you have to find evidence to show that’s what they’ve been doing,” she said.  “Other than that, we would have nothing.”

The need to catch dog-fighters in the act often makes police seem inactive when a report of animal cruelty comes to their office, she said.

“We get a lot of calls from people saying ‘These dogs are fighting.’ and if you go to the property but don’t see the dogs fighting, you don’t really have anything to get a search warrant,” Ewing said.

Often it is delivery drivers — FedEx, UPS or USPS workers, she said — who report these kinds of incidents since drivers are allowed on property that is often off the public road as a part of their job.

“I think the public thinks some of their calls are not taken seriously — they’re taken very seriously,” she said. “We have to take a step back and wait it out in the hopes that we can get that fighting charge.”

The impetus is also on local leaders, she said, to take action to prevent suspected dogfighters from reentering society.

“You know the manpower we had out there all these days and nights trying to get this taken care of, only to turn around and have that bond set so low that he walks out,” she said, referring to Tommie Queen, the suspect in Monday’s bust, who bonded out of jail as soon as the bond was set. “It’s heartbreaking.”

Beyond being disappointing for the officers who find and arrest suspected dogfighting operation owners, Ewing said it is simply dangerous to release men and women who are cruel to animals.

“Ninety-nine percent of the time, they’re on drugs, they’re violent and they’re out,” she said. “It endangers too many people. Those kind of charges should have had the maximum bond they possibly could have.”

The outcry following recent dogfighting cases in Adams and Madison counties have given legislators such as Dearing hope that laws surrounding animal cruelty can change, but a long-standing foe will stand in the way.

But Dearing said he may be able to change that.

The state senator will be part of a Monday meeting at Natchez City Hall called by mayor Darryl Grennell, at which officials will discuss ways to go about achieving more stringent laws.

Dearing said he plans to study animal protection laws in surrounding states with the hope of convincing the Mississippi Legislature to employ laws similar to its neighbors, but that may not be the improvement law enforcement and animal rights activists want.

The Humane Society of the United States’ rankings placed Louisiana at No. 12, by far the highest of the states surrounding Mississippi. The remaining contiguous states placed, in descending order, Alabama, 46, Arkansas, 36 and Tennessee, 33.

Dearing also said he hopes to obtain pictures from the Adams County Sheriff’s Office that display the horrific nature of the dogfighting scene on Miracle Road and use those images to sway lawmakers.

“Let me take these pictures back up to the capitol and ask for a hearing in front of the (Mississippi House and Senate) Ag(riculture) committee and show them these pictures, just to show them how terrible this situation was down here, and maybe we can get something done that way.”

Greene said the Natchez-Adams County Humane Society were overwhelmed by the intake of dogs from the Miracle Road property.

Though the 11 dogs — nine adults and two puppies — the shelter had been caring for were released to the ASPCA, Greene said in most similar instances dogs will remain with the NACHS until the court proceedings of a case are finished. The cost of caring for those dogs in those instances, he said, racks up quickly.

Depending on the amount of dogs to be cared for, Greene estimated that lengthy court proceedings could cost the society tens of thousands of dollars.

But for all the hardship and cruelty resulting from this past week’s ordeal, Greene truly believes it could result in action.

“We need their help up there in Jackson,” Greene said. “This sort of thing is a quality-of-life issue in the community. And we want to improve the quality of life in the community by strengthening the laws.”

Greene said he wants to establish a lobbying group that will, for however long it takes, advocate for these types of laws until they are put into place.

Another result Greene said he hopes to see is an enhanced emphasis on collaboration between the city and the county to handle instances such as these.

“I think it would be a good thing for them to combine resources,” he said.

Greene is not alone in his hope. A recent petition to strengthen animal cruelty laws in Mississippi on Change.org has garnered more than 2,300 signatures.

“The recent discoveries of the two dog fighting rings have moved me to tears,” the petition reads. “Seeing the horrific conditions of these poor animals were in along with the deplorable conditions they were forced to live in is appalling. Surely, you have seen the public outcry that the individuals responsible will will not get more than a slap on the wrist for this. The residents of Mississippi demand justice for these crimes.”

Until legislators agree on a strengthened set of laws, however, Ewing said she fears law enforcement officers will continue to find dogfighting rings and breeding grounds.

Three of the dogs on the Miracle Road property were pregnant, Ewing said, and without intervention, those puppies would likely have followed their parents into the fighting ring and, eventually, to a makeshift grave.

Though at least some of Queen’s dogs have been spared that fate, Ewing said many other animals are likely in a similar situation, and will remain there until the state’s laws are strengthened.