Getting a kick out of football: Costa Rican brothers learning, excelling at sport 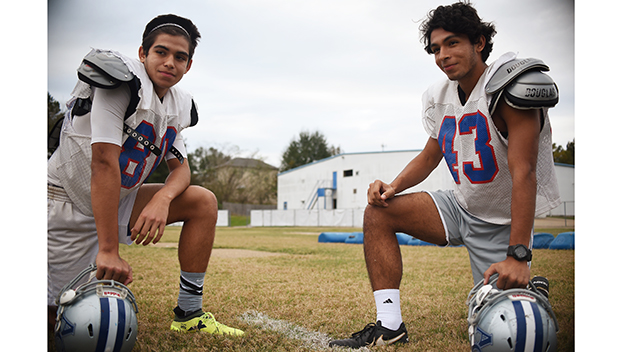 Adams County Christian School sophomore Yohan Thompson, left, and his brother, Cris Thompson, were born and raised in Costa Rica until moving to the Miss-Lou in 2013. As children, the two loved football but knew little about the sport. (Nicole Hester / The Natchez Democrat)

NATCHEZ — Before moving to America, Adams County Christian School’s Cristopher and Yohan Thompson weren’t used to hitting people — well, besides each other.

Born and raised in Costa Rica as soccer players, tackling was a foreign concept. For as hard as they tackle players on the football field now, the Thompson brothers were thrown into the sport of American football possibly just as hard.

“There is no organized football down there. It’s just soccer,” Cris Thompson said about his childhood in Costa Rica. “My dad would come up to America to visit, and he would bring us back a football because they don’t even sell footballs down there.”

Even once the brothers had a football in their possession, they didn’t quite know what to do with it.

“We would throw it all around, but that’s all we knew,” Cris Thompson said. “We didn’t know anything about plays or formations. All we knew was throwing the football until right before we moved up here. Then still, we watched it on TV but we had no clue the rules or anything.”

The Thompsons moved to the Miss-Lou on Dec. 16, 2013. Cris was 14, and Yohan was 12. Their father, John Michael Thompson, was raised in the area, splitting time between his parents in Natchez and Jena, La.

After serving time in the U.S. Army, John Michael Thompson moved to Costa Rica after a trip with a friend.

“He always wanted to be a soldier. That was his dream,” Yohan Thompson said. “After nine years of service, he suffered a heart attack and had to medically retire.

“His friend had been to Costa Rica a few times and asked if my dad wanted to go with him, so they went down there for a few months. Dad liked it so much he went back by himself and he stayed for 18 years.”

Despite a lengthy stay away from home, there was a desire for his father to move back, Yohan Thompson said.

“He’d always wanted to, but it never really worked out,” he said. “My dad got full custody of us, and we lived with him for the last few years we were there. We finally moved up here because my dad realized there wasn’t as much opportunity for us growing up in Costa Rica.”

It didn’t take long for opportunities to blossom, either. As an assistant coach for the Rebels, Matthew Freeman wasted no time testing the brothers’ skills.

“From what we had heard, they were soccer stars. I thought if they could kick a soccer ball, surely they can kick a football,” Freeman said. “We hadn’t really ever had a true kicker. I brought Cris out here during his lunch period, I put the ball on the ground and I told him to kick it.”

That’s exactly when everything clicked.

“I said ‘Alright I know what a field goal is, so I’ll try this,’” Cris Thompson said. “I was wondering what was so hard because I was right under the goal and all I had to do was chip the ball.”

“He was hitting the fence with every one of them,” Freeman said. “We backed it up, and he was just drilling them. I immediately went back to the cafeteria and told Coach (David) King that we had our kicker. He made it look so easy.”

Now a senior, Cris Thompson has become even more proficient in his kicking. He recently nailed a 60-yard field goal during practice.

Since Freeman posted a video of the kick on his social media accounts, Cris has received a mass of feedback, including scholarship interests from Alcorn State University, McNeese State University, Mississippi College and Copiah-Lincoln Community College.

“It has blown up and it’s everywhere,” Cris Thompson said. “It blows my mind because I never thought I would even go to college. I always thought I would just play soccer. The whole football thing and maybe playing for a college football team never crossed my mind, especially kicking.”

While the Rebels ended their season this past Friday with a loss to Starkville Academy in the MAIS Class AAA semifinals, Yohan Thomson has plenty of time to follow in his brother’s footsteps.

Now a sophomore, this is the only year Yohan Thompson will have played varsity football with his brother.

“When we moved up here, we went to the Cathedral games and I was just there to tag along,” Yohan Thompson said. “Cris got really into it and starting working out a lot. He was always outside running and stuff, and he got really built.

“When we got here to ACCS and I met all the coaches, I was hooked. I knew I definitely wanted to play football. Since Cris was already in shape, we would work out together that whole summer. I really didn’t even notice it, but I lost like 45 pounds in the span of two months, and I shot up like five inches. I guess I just got lucky.”

Cris Thompson said he could hardly believe the change, either.

Yohan Thompson agreed the chance to play football has been rewarding, especially with his brother.

“I was good at soccer and had skill, but I really wasn’t that athletic,” he said. “If it wasn’t for him, I’d still be the same. I came out here and it helped me come out of my shell. It’s truly great, and the last three years have been amazing.”

Since moving to America, the Thompson brothers have returned to Costa Rica — where their mother still resides — just once on a summer trip in 2015.

Though Cris Thompson said he is excited for what the future holds, he will never forget his roots.

“I doubt we will move back there because we have so many opportunities here,” he said. “But, definitely we will go to visit.”