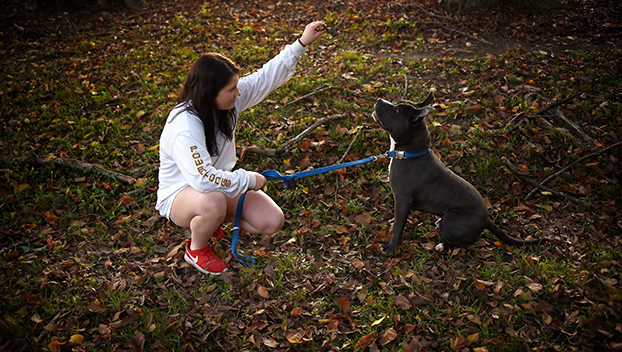 Caroline Cotten works with her dog Diesel at Duncan Park. Diesel is an American Bully dog, a type of dog about which many people misunderstand, Cotten said. (Nicole Hester / The Natchez Democrat)

NATCHEZ — Caroline Cotten walks her big, gray American Bulldog in Duncan Park every day she can.

When The Dart landed on Duncan Park, Cotten and her dog, Diesel, were playing a game of catch with a fuzzy, yellow tennis ball.

When the Adams County Christian School junior gets home from school every day, she picks up Diesel, and they go out to play.

Diesel was a gift from her boyfriend in March, when the puppy was small enough to fit in just one of Cotten’s hands.

“I’d asked for him ever since we started dating,” she said. “But I was never really a dog-lover until I got him.”

“He’s not aggressive,” Cotten said. “He’s sweet and loveable. He can’t tell the difference between rough and play.”

Some people fear Diesel. They see a big, pit-bull-like dog and think he might bite, but Cotten said she thinks those fears are unsubstantiated.

“I don’t understand it,” she said. “Everybody says they’re a mean breed, but they’re really not.”

Sometimes all that roughhousing is scary for Cotten and for her parents, Katie Beath and Tee Cotten, who live in Vidalia.

Cotten said her mother is scared Diesel will one day accidently hurt one of the children, but Cotten said the dog is not going anywhere.

Cotton said she is afraid to ever part with him for fear he might become owned by a dogfighter.

“I’d be scared to sell him here,” Cotten said. “I’ve read all the stories about the fighting, and I don’t want that to ever happen to him.”

Instead, Cotten is sending Diesel to an obedience trainer so he will learn how to behave while he is inside their house, where he spends most of his days.

That training should pay off, she said, when she goes to college in a year.

Cotten said she wants to become a respiratory therapist, like her father, after studying at Baton Rouge Community College.

BRCC, she said, occasionally has a “bring your pet to class” day where students mill about the campus with all manner of dogs and cats and the occasional lizard.

Cotten said she could not bear to part with her dog for all of college, so he has to be obedient enough not to frighten people.

In her mind, though, Diesel is nothing to fear.

“It’s all in how you raise them,” she said while sitting in the pine straw and rubbing the big dog’s belly.

Diesel wagged his tail and tried to lick Cotten’s face.