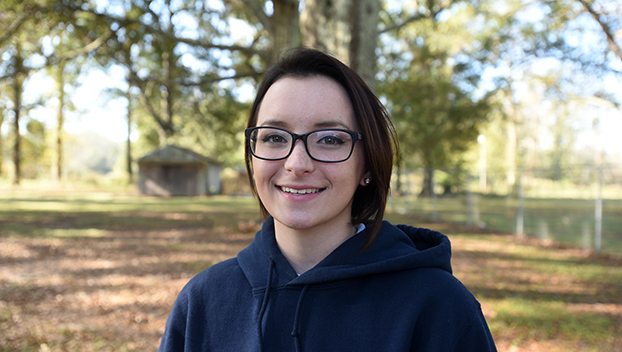 Delta Charter School senior Jessica Mount went on a mission trip to the Dominican Republic, where she discovered a passion for helping children. (Clara Turnage / The Natchez Democrat)

NATCHEZ — Jessica Mount went to the Dominican Republic to bring aid to residents living in poverty, but in doing so Mount says she discovered a dream.

The senior at Delta Charter School said she has always enjoyed helping people — she volunteers with different organizations in Ferriday and helps out with vacation Bible school at local churches — but in a hot jungle far from home she discovered just how much she loves helping children.

Mount spent part of her summer in the Dominican Republic volunteering with Sunnyside Church to build a playground and to minister to children.

Mount said he became particularly close with a little girl named Isabella. Though neither of them spoke the other’s language, Mount said she and the child developed a bond.

“When I left, I wanted to tell her I loved her,” Mount said. “So, I pointed at my eye, then at my heart and then at her, and she did the same thing back to me.”

Helping those children, she said, helped her realize what she would like to do in the future.

“My grandpa always told me, ‘When you get out into the real world and get a job, get something that you want to do, that you’ll have a passion for doing,’” she said. “For me, that’s social work.”

Mount said she is passionate about helping people who are impoverished or disadvantaged.

“Things I wanted as a child, I didn’t get,” she said. “So if I could give that to other children, it would make me happy.”

Mount is already living out part of that dream through her other volunteering. She goes each Thursday to Celebrate Recovery, a rehabilitation therapy group.

“Whenever I get older, I want to teach there,” Mount said. “It’s opened up doors for me, and I want to do that (for others).”

While visiting her father, Curt Mount, in Florida over the summer, Jessica Mount volunteered with the Veteran’s Health Administration hospital.

Mount said she thanked each veteran she met, but that the experience was somewhat saddening.

“They said nobody ever comes to see them, and it made me really sad,” she said. “Nobody appreciates them.”

Mount said she hopes, as she moves to college and then off into a job, she will continue to make time for people who need her.

Mount said that in part, she had Delta Charter School to thank for helping her discover who she would like to become.

If she had not attended Delta Charter when she moved in with her grandparents, Jill and Raymond Brown, she said she might never have become a member at Sunnyside Church, where she became involved in mission trips.

In the future, Mount said she dreams of helping children in distant countries as well as volunteering in Ferriday.

Mount said she wants to help people wherever she can.

“I have a passion for helping people,” she said. “And I think social working will be a good way for me to do that.”