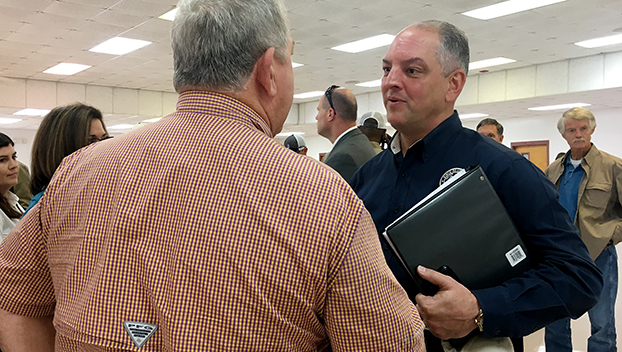 “We want to listen,” Edwards said. “Too often in politics today people are talking past one another and no one is listening.”

Edwards and Louisiana Department of Agriculture and Forestry Commissioner Mike Strain heard questions ranging from the repair and maintenance of parish roads and bridges to the excessive feral hog problem in rural Louisiana.

For many question, Edwards and Strain had no answer, instead deferring the specifics of the matter to another office or offering to follow up with the query.

That, Strain said, was to be expected in a listening tour.

“We don’t have all the answers,” Strain said. “And some answers aren’t the ones you want.”

Randy Ward of Goldman Equipment in Waterproof asked if the Department of Agriculture and Forestry could add a list of farmers who had received their R-1070 certification from the state as a manufacturer or farmer.

Those who have the R-1070 certification are qualified for a tax exemption for the purchase of some machinery and equipment.

Without some sort of database showing which farmers are certified, Ward said it is difficult to determine whether the buyer should receive the exemption.

Edwards said this was not the first time someone had brought up that issue to them on the tour, and that he and Strain had discussed possible solutions.

“It may be possible to create a site to see who has a current certificate,” Edwards said.

Strain said if such a site were created, the department would have to be careful what information was shared in order to protect farmers’ privacy.

Scott Williams, who has owned his farm for 32 years, said last year the primary bridge near his home was under construction for two months in the middle of harvest. He asked if more attention could be focused on repairing rural roads and bridges.

Edwards and Strain said the answer they had might not be a satisfactory one.

The State of Louisiana, Edwards said, is currently $13 billion behind in transportation projects.

“There are Franklin Delano Roosevelt–era bridges all over Louisiana,” Edwards said. “We know it’s more than an inconvenience, it’s a loss of money, but there is no easy answer.”

Strain also used the meeting as a testing ground for public opinion on a new fuel and road tax that would, in part, fund rural road and bridge repair.

If provided with some surety that the money would be spent in rural areas, Williams said he would vote for the tax. Many other farmers in the room agreed.

Another issue without a clear answer, Strain said, is the numerous wild hogs in Louisiana.

Edwards said until the number of hogs killed each year reached approximately 500,000, he doubted the overall population would decrease.

Strain said Louisiana State University is currently working on an oral vaccine that would sterilize hogs, but that the chemical had not been perfected yet.

Until then, Strain said Louisiana had made it increasingly simple to hunt hogs. Anyone can shoot a hog during day or night for the majority of the year, though nighttime hog hunting is illegal during deer season.

Edwards said he and Strain had discussed many ideas — from putting a bounty on each hog killed to trying to make the animals more enticing as a food source.

Again, he said, it was a problem that does not have a solution yet.