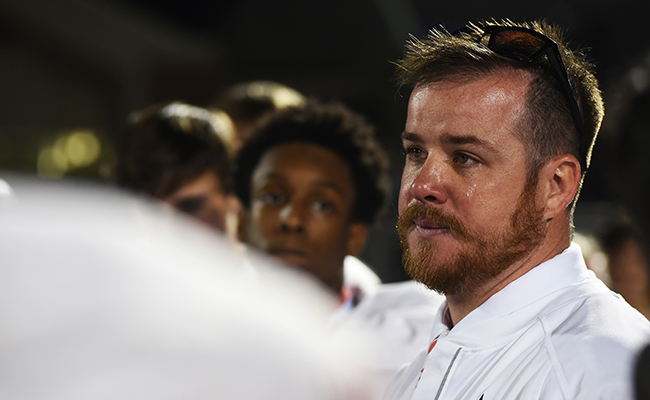 Trinity Episcopal head coach Graham Roberts tears up while talking to his team after losing in overtime to West Memphis Christian School 56-48 during the MAIS Class A State Championship game Thursday at Jackson Academy. (Nicole Hester | The Natchez Democrat)

JACKSON — Trinity Episcopal football coach Graham Roberts fulfilled a childhood dream Thursday, as he participated in a state championship game for the first time in his life.

Despite a heartbreaking overtime loss to West Memphis Christian School in the MAIS Class A title game at Jackson Academy, Roberts said the experience was everything he imagined it would be.

“It was a literal dream for me to play for a state championship. It was everything I expected it to be,” he said. “In all honesty, you couldn’t ask for a better game— high scoring, very emotional.”

When Roberts played for Vidalia High School in the early 2000s, he said he remembers turning down opportunities to watch the New Orleans Saints play in the Mercedes-Benz Superdome — where teams in the LHSAA also play for state titles —all because of a promise he made to himself.

Roberts’ senior year in 2004 was the last time the Vikings had made the playoffs until this season. In his junior year, the Vikings fell in the semifinals leaving Roberts just one game short of his dream.

Last season in his first year as Trinity’s head coach, the Saints also fell in the semifinals.

With a loss perhaps much tougher to process on Thursday, Roberts said he was still thankful for the opportunity.

“It was something I always wanted to do, I just wish we would have won it,” he said.

The Saints ended their season with a record of 7-4.

Vidalia will continue this season’s playoff run tonight as it hosts Northeast for a second-round matchup at 7 p.m.