Public relations consultant: The more people see us, the more they know us 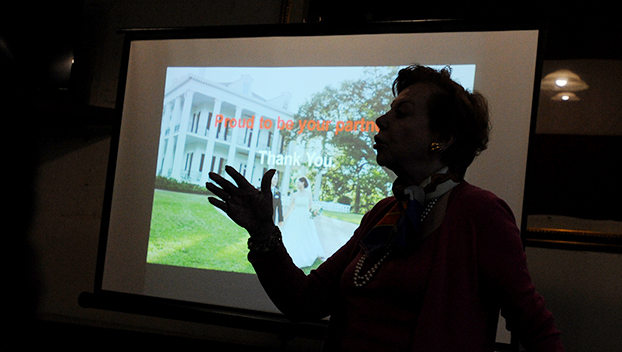 Public relations expert Lou Hammond gives an update on her PR work for the Natchez Convention Promotion Commission and some of her vision for the upcoming year. (Ben Hillyer / The Natchez Democrat)

Thanks to the west coast travel writer, now millions of people may know more about Natchez.

Yagi’s article reporting from his three-day trip to Natchez is being seen in San Francisco, Portland, Chicago and 20 other CBS outlets across the country.

“One man, three days, 23 outlets with a reach of 489 million people,” Hammond said. “That is the power of syndication.”

Hammond provided an update of the state of public relations for the city and a vision for what is to come in 2018. Hammond also spent most of the day meeting with the Natchez CVB staff, members of the Natchez Convention and Promotion Commission and local tourism stakeholders.

As a result of Hammond’s efforts to inform national and regional media outlets about Natchez, the city has been featured in numerous magazines and newspapers across the country.

Examples include articles in Southern Living, Reader’s Digest, the Los Angeles Times and a video on Zagat’s You Tube channel, Hammond told the group.

“We wouldn’t have been able to get (syndicated radio show host) Peter Greenberg if it hadn’t been for Hammond’s connections,” she said.

“We don’t have a staff person that does PR and we haven’t for a long time,” Combs said.

Hammond said she has begun to look at new opportunities for 2018.

In the coming year, Hammond said her group will focus on markets in Atlanta, Birmingham, Ala., Texas, Nashville, Tenn., and New Orleans.

One possible focus will be on the American Queen Steamboat Company and its two river boats  that travel up and down the Mississippi River.

“We want to focus on stronger ties with the company,” Hammond said. “An average cabin is $1,000. That is money pretty much coming right down the river to us.”

“They see a potential in us that we may not see because we are in the middle of it all,” Combs said. “She has some really good ideas. Some of them will work and some of them might not. But what they are doing is exciting.”