Stewpot feeds more than 400 needy in Natchez for Thanksgiving 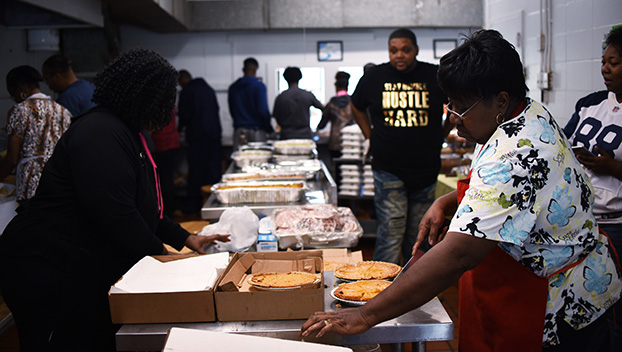 NATCHEZ — The Natchez Stewpot filled Thanksgiving Day with more than triple the number of volunteers that prepare meals for the hungry on any other day.

In the crowded, steamy kitchen, an assembly formed, with each person fulfilling a specific role.

From ladling potato salad, dressing or cranberry sauce to washing the large baking pans, each of the approximately 20 volunteers’ job was equally necessary to the goal: Feeding approximately 400 people who might otherwise not have Thanksgiving dinner.

Most of the volunteers have their own families, their own traditions. But instead of spending a cozy morning by the lake or sitting down to lunch with family and friends, they were laughing, talking and working together for the benefit of people they hardly know.

Among the production line were first-time volunteers, 20-year veterans and permanent workers at the Stewpot.

One of the youngest volunteers was Shamar Brown, 16, who was volunteering on Thanksgiving for the first time.

Next to Brown was Michelle Mosby, a five-year veteran of the operation.

Brown said being at the community kitchen was an opportunity to give back.

Brown and Mosby talked about all kinds of things, from basketball and college to the best way to stack the heavy, Styrofoam containers for delivered meals.

Outside the Stewpot, Mosby and Brown have little contact. In the kitchen, though, they have the “opportunity to give something to the least fortunate,” Mosby said.

Mosby first volunteered at the Stewpot because of a youth program at his church, which Neashion Davis said is a common way for people to become involved.

Davis’ family is the backbone of the Stewpot, with several in-laws, cousins and siblings working together in the kitchen each day.

Davis’ mother-in-law, Johnnie B. Davis, has been working at the Stewpot for 26 years. She designs the daily menu, oversees the kitchen and helps cook each day.

On Wednesday, Johnnie B. Davis and several members of her family stayed at the Stewpot until 9:30 p.m. just preparing for the coming day.

“It really is a family thing,” Johnnie B. Davis said. “We do it together.”

For Neashion Davis, differentiating between Thanksgiving and a normal day at the Stewpot is difficult.

“Really, there’s nothing special about Thanksgiving,” she said. “Every day we get to help people. Every day is Thanksgiving here.”

One difference, she said, is the number of people who get to volunteer.

“Normally, people are working,” she said. “They can’t volunteer every day.”

In her mind, she said, the opportunity to give back is the blessing. Being able to donate time and effort to the less fortunate, she said, is a gift.

“We’re blessed to be a blessing,” Davis said, standing next to a swath of steaming turkey that was ready for plating. “That’s what we say.”