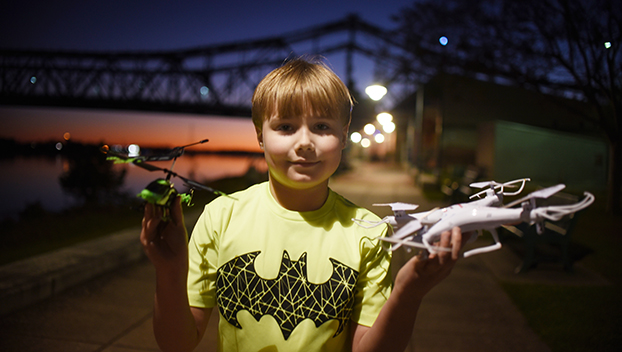 Above: Kaden Coats, 7, poses with two of his drones on the Vidalia Riverfront Sunday afternoon before returning to school on Monday. (Nicole Hester / The Natchez Democrat)

With the flick of the 7-year-old’s finger, the little green and black helicopter zooms upward, only to freefall back to the ground before Coats hits the accelerator.

When The Dart landed on the Vidalia Riverfront, Coats and his parents, Phillip and Denver Coats, were spending a quiet Sunday evening by the water.

“It’s peaceful,” Denver Coats said, looking at the still river and the sunset’s reflection. “Look at the water; it looks like glass.”

Kaden’s eyes are trained not on the slowly turning water below, but upward.

“I like how high they get,” Kaden said. “If the little one gets too high, it’ll lose power and fall.”

Keeping the toy poised at just the right height to be interesting, but not so high that it risks falling, is difficult, Denver Coats said, but Kaden has lots of practice.

“He flies them mainly in the backyard, but sometimes we take him somewhere,” she said.

Kaden’s first drone was a gift from his grandfather, but after seeing how much their son liked the aircraft, Phillip and Denver said they purchased him a few more.

Just a month ago, Kaden was absorbed in football. He was on the all-star team at Vidalia Lower Elementary, a team that Denver proudly says went undefeated this year.

Once the season wound down, however, Denver said his eyes were back on the skies.

Sunday was the last day of the Thanksgiving break before Kaden returned to Vidalia Lower Elementary School, where he is a first-grader.

Kaden is shy, Denver Coats said, but he quickly becomes a chatterbox as he warms up to people.

Denver Coats said she sends Kaden to summer camps to help alleviate his shyness, but that he’s still wary about strangers.

When asked about his drone, however, Kaden lights up, talking about how high and fast the little machines fly.

Soon he is running back and forth down the sidewalk, keeping up with the drone and tugging on his father’s sleeve.

He will keep flying until the drone’s battery runs out or until the sun dips below the still water, whichever comes first.

Hats off to good fathers

Captain of tugboat found dead in boat on river