Teens in custody after shootout with police near Brookhaven High School 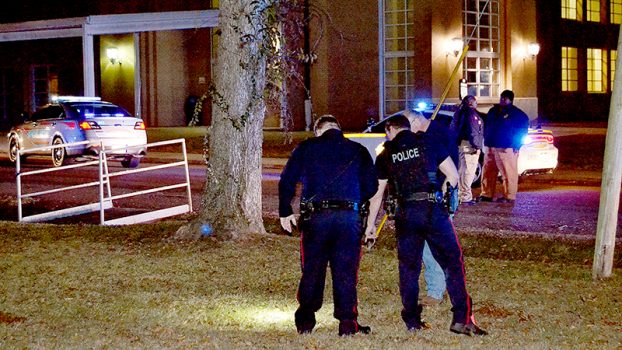 Photo by Donna Campbell/Brookhaven Police Capt. Clint Earls and two officers mark the spot where shell casings were found in Panther Park late Monday night following a shootout between a juvenile and an officer after a traffic stop in front of Rosehill Cemetery.

By Donna Campbell
The Daily Leader

Two male juveniles are in custody following a shootout between one of the teenagers and a Brookhaven police officer late Monday night.

Police Chief Kenneth Collins said no one was injured in the exchange of gunfire between the suspect and officers.

The incident started shortly before 11 p.m. when officers attempted to stop a black sedan on East Monticello Street near Henry Myers Street in front of Brookhaven High School.

Collins said the driver stopped and the passenger — who was recognized by police — jumped out and started running across the campus toward Panther Park. Another police car pulled onto North Third Street and blocked the juvenile, who then started shooting at police.

The juvenile ran and police and Lincoln County Sheriff’s deputies set up a perimeter around the block. Officers tracked his moves through the ankle bracelet he wore.

The suspect was apprehended behind the buildings between Progressive Insurance and Lincoln County School District on East Monticello.

“It was a joint effort to get the subject in custody without anybody getting killed,” he said.

Officers scoured the area around the school and at least two shell casings were found in the park just before midnight. The gun was recovered soon after.

Collins did not know what the initial stop was for, but said that police are stopping all suspicious vehicles in a continued effort to locate Justin Anderson, who is a suspect in the shooting death of Billy Ray Thomas Friday night at the Oasis Club on Martin Street at South First Street.

Collins said the juvenile who ran may be charged as an adult for shooting at officers.