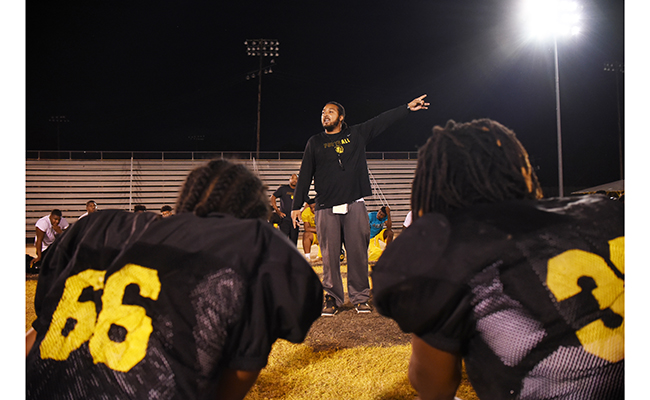 Since Ferriday High School’s Stanley Smith began his journey as head football coach this past March, he watched as the Trojans devoted hot summer afternoons to training and conditioning — often greeted by locals as they ran the streets of town day after day.

Smith admitted the dedication has likely proven to be the reason his alma mater is now on the brink of a trip to the LHSAA Class 2A State Championship, yet he might as well throw it all out the window.

“You must all think I’m mad,” he told the Trojans following Wednesday’s practice. “But, there is a method to my madness. You haven’t done a thing yet.”

Second-ranked Ferriday is set to host No. 6 St. Helena at 7 p.m. Friday in the Trojans’ first semifinal playoff game since 1995.

The memo, Smith said, was an effort to keep his players humble.

“You don’t get a reward for reaching the semifinals,” he said. “The summer was very monotonous, and it was a grind. But, we are still playing right now and I think the offseason played a huge part in it. We want to make sure we stay focused and stay hungry.”

Ferriday (11-2) has come a long way from its long summer workouts. Last week, the Trojans notched its quarterfinal win over No. 10 Red River, 52-0. The Bulldogs were held to minus 3 yards of total offense.

Smith said a statement like that — as well as those of wins over Class 4A and 5A schools this season — says a lot about the mindset of his team.

“I changed the attitudes and the culture,” he said. “They are very talented, but discipline and work ethic was a challenge. I pushed them and motivated them to be better than they were the day before. Everything you do matters, and I think right now it’s paying off.”

The Hawks’ biggest threat, Smith said, is its ground game.

“We have to stop the run. They are very athletic — big, fast,” he said.

Just one step away from its shot at the Mercedes-Benz Superdome, Smith said he is just ready to get going.

“It’s going to be electric here Friday night. I’ve gotten calls from people who haven’t been home in 20, 30 years telling me they are going to be here.”