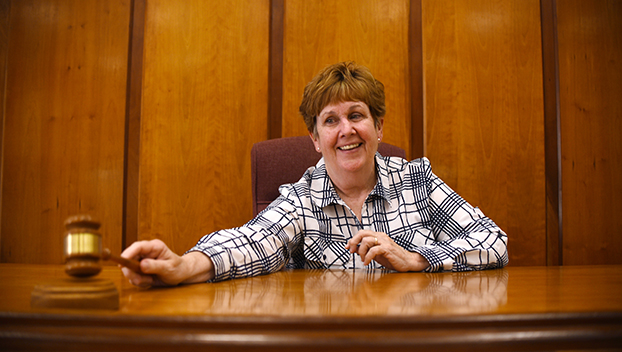 NATCHEZ — Just hours after being elected by a single vote’s margin, Eileen Mary Maher sat down in a judge’s chair for the first time.

“I guess I should see what this feels like,” she said smiling, minutes before her swearing in would begin.

As a small crowd of friends, family members and supporters gathered in the circuit court courtroom, Maher picked up a wooden gavel and tapped it loudly on the sounding block.

“Court is in session,” she said, joking.

Maher was officially sworn in as the new Southern District Justice Court judge at 4:27 p.m. Wednesday, only three hours after the absentee and affidavit votes were counted that same day.

She lay one palm on an old, worn Bible that was held by her husband, Mark LaFrancis, and raised the other hand to vow to serve the county fairly.

Sixth District Circuit Court Judge Forrest “Al” Johnson led the swearing in, and an applause followed Maher’s final recitations. In the crowd sat Lisa Chandler, a longtime friend of Maher who brought a gift: a gavel and sounding block made of dark wood with a golden plate that will soon hold the engraved name of the newly elected judge.

A total of 847 people voted for Maher, edging her ahead of opponent Danny Barber in what election commissioner Larry Gardner called the closest race in an Adams County election in approximately 20 years.

“Fifty percent plus one — that’s the law,” Gardner said.

The election was too close to call Tuesday night, with Maher ahead by only 11 votes and 58 absentee and affidavit votes still uncounted.

The final votes were counted Wednesday starting around 12:30 p.m., and by 1 p.m., Gardner said the election results were official.

Maher said she was excited for the win, and that the extremely close election was “crazy.”

One of the absentee votes and one of the affidavit votes could not be counted.

The uncounted affidavit vote was disqualified because the resident in question attempted to vote in the Duncan precinct despite living in the Oakland area. Oakland was not one of the nine precincts polled for this special runoff election.

Gardner said one absentee vote was discounted because the form was filled out so poorly that the commissioners could not tell which candidate the voter chose.

Under normal circumstances, this uncounted vote would make little difference in an election. But with Maher only one vote ahead of Barber, this one vote could have led to a tie.

Gardner said he expected to have more affidavit votes to count and election commissioners originally planned to release final results on Thursday.

“The resolution board came in early,” Gardner said. “We were able to get through it faster than we thought.”

Both candidates have 10 days to contest the vote or ask for a recount, Gardner said.

Barber said he was not planning to ask for a recount, but that he had not made up his mind.

“I’ll think about it,” Barber said. “If she wins by one vote, that’s the will of the people.”

Though there was no official turnout percentage compiled, Adams County Circuit Clerk Eddie Walker said that number is approximately 15 percent of eligible voters in the nine districts.

Gardner said absentee votes normally mirror the results of the rest of the election, but that Maher actually lost ground after the count on Wednesday.

“Some of the districts (Maher) was leading in actually had more absentee votes for (Barber),” Gardner said.

Walker said this election should be a lesson to people who believe their vote will not make a difference.

Later this month, Maher will return to the judge’s chair for her first official court proceeding as judge.