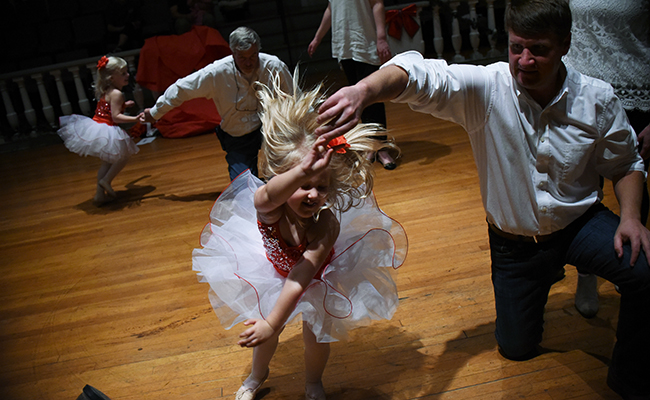 Annie Edwards is spun by Stephen Edwards during practice for the Middleton School of Dance Christmas Rehearsal Wednesday at the Natchez City Auditorium. Inset below, Aeribella King looks up to Robert Mize during practice. (Nicole Hester / The Natchez Democrat)

NATCHEZ — Christmas Eve is coming early for attendees of the 2017 “Twas the Night Before Christmas” ballet.

Each year director Ann Gaude said she tries to make the show a little different, adding in new songs or scenes to keep parents and patrons of the Middleton School of Dance coming back.

But the tradition of it all — the lights, the stage, the music and, of course, the story — are what endears the production to parents.

Tonight’s show will start at 7 and the novel aspects include a Santa Claus that is up and about, including audience members in the story and drawing viewers into the tale. A few reindeer and elves, too, will be roaming the aisles, Gaude said.

Many of the dancers in the ballet have been a part since they were only 3 years old, such as Shelby Roberts, who is playing in “Twas the Night Before Christmas” for the 12th consecutive year.

Others began only a few months ago, such as Laura and Lizzie Doan, who joined the production in September.

Though it was a little difficult to catch up so quickly, Lizzie and Laura Doan said they had a great teacher.

“It was hard at first, but Mrs. Ann is very helpful,” Lizzie Doan said.

Gaude is continuing to bring in new little dancers. At the end of the ballet more than a dozen little 3-year-olds run out on stage holding their mother’s hands.

Out on the auditorium floor, each performer’s father is hiding beneath a red cloth with a bow on top.

They are presents, and each child has to find the tag that matches their name to “unwrap” their parent.

When they find their nametag, the mother pulls of the red wrapping and the father lifts his little girl in the air.

For Myra Perry, dancing with her daughter, Maddi, is nostalgic in a way.

Perry took dance lessons when she was young from Gaude and now she is back on the floor with her husband, Christopher.

Maddi Perry said her favorite part of the ballet is simple.

Having the parents participate in the performance is a relatively new addition to the Christmas program, Gaude said, but it helps the children build confidence.

The older girls have no problems with stage fright, they said.

Getting to show all the new moves and techniques they have learned in the last year makes it easy to dance in front of a crowd that Gaude said often reaches approximately 600.

Nearly 100 children of all ages are involved in the show, with parts ranging from snowflake to reindeer to elf and, ironically, to ballet dancers.

“They are a fun group,” Gaude said. “They work hard and they want to get better for themselves. They want to grow.”