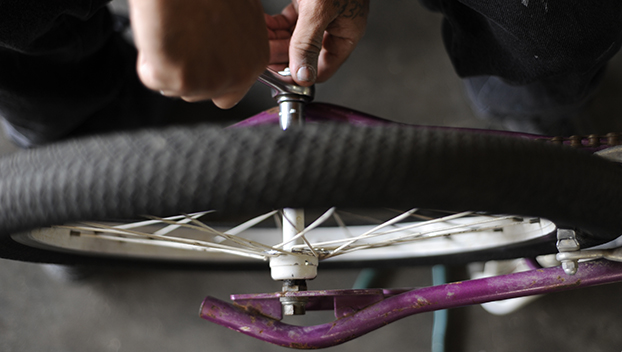 A Concordia Parish inmate works on a bike for a boy or girl to receive as a Christmas gift. (file photo)

VIDALIA — Concordia Parish Sheriff Kenneth Hedrick said he would like to see every area child who wants a bicycle for Christmas to have one.

Thanks to donations from the community and a little bit of elbow grease from parish inmate trusties, Hedrick said his office has the means to help children get bicycles through the “Trikes and Bikes” program.

“For the kids out there who would love to have a bike, but have never had a bike because their parents can’t afford one, we want them to have the same opportunity as other kids,” Hedrick said. “This is something we can do for them, and we are proud to be able to do it.”

The program takes used, and sometimes new, bicycles, tricycles and other riding toys donated by the community, refurbishes them and gives them to less fortunate parish children.

Hedrick said the condition of donated bicycles does not matter because even if it is beyond repair, some parts could be used for another bicycle.

Sheriff’s office spokesman Vernon Stevens said the program has existed for more than 20 years and gives out approximately 300 bicycles each year.

People wanting to donate their new or used tricycles, bicycles, scooters or even motorized toys can bring them to the courthouse at 4001 Carter St. in Vidalia. Items can be dropped off at the back of the courthouse, where someone can assist in unloading the bikes if necessary.

Stevens said the sheriff’s office has approximately 200 bicycles so far.

Hedrick said the monetary donations are important because the funds are used to buy new parts, such as tubes, seats and handlebars, as well as paint.

“We fix them up good,” Hedrick said. “We make sure they are safe, clean and painted with good tires and ready to go.”

Stevens said the sheriff’s office is in need of cash donations.

Any families with a child 16 and under can register beginning Dec. 11 until Dec. 15 at the sheriff’s office.

“It is just a blessing to be able to help the people who can’t afford a bike,” Hedrick said. “I feel like we are helping the community out and doing our part to help underprivileged children.”