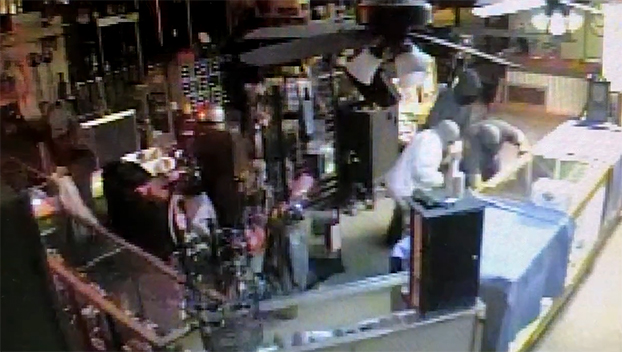 Bryant said 25 guns and a large quantity of jewelry were stolen in the break-in.

After Bryant and other workers in the shop took inventory of the remaining jewelry, they totaled the value of the missing pieces to approximately $7,000.

Along the walls of the shop are numerous other shotguns, and rifles, but none of those weapons were taken.

Also in the shop were hundreds of other pieces of jewelry and goods, but that, too, was spared.

Instead, one robber ran straight to glass cases that were across the store from the door and hidden by a large display in the center of the room.

“They knew exactly what they were going for,” Bryant said. “They got what they wanted.”

Deputies with the Adams County Sheriff’s Office arrived at the pawn shop at approximately 7:55 a.m. after Bryant called them.

Bryant said his security system, ADT, never sent him an alarm for the burglary.

The alarm did sound when Bryant came in around 7:50 a.m. Saturday to open the store. Bryant said he was walking to the back of the store where he enters a key code to turn off the alarm when he noticed the glass littering the floor.

Bryant said he has been having trouble with his alarm system for a few weeks now. The monitor shows an error message.

An ADT representative went to the pawn shop Friday to fix the error, and Bryant said the agent demonstrated a functioning system to him.

But when robbers came just hours later, no alarm sounded.

Bryant said his security cameras picked up on a similar incident just two days before the robbery.

On Wednesday night, two men wearing masks, gloves and hoodies, — similar to the clothing the robbers wore Friday night — walked in front of the pawn shop.

“They tried to cut power to the building, and when the lights didn’t go off, they left,” Bryant said.

This incident, too, was caught on video.

Bryant said he believes the suspects have frequented the store before based on their knowledge of the building’s layout.

Bryant also said he believes the attempted robbery that happened Wednesday is connected to the incident Friday night.

Since the suspects were masked, hooded and wore gloves, ACSO’s Maj. Jerry Brown said identifying the individuals will be difficult.

Brown said the sheriff’s office set up a $1,000 reward through Crimestoppers for anyone who has information on the burglary.