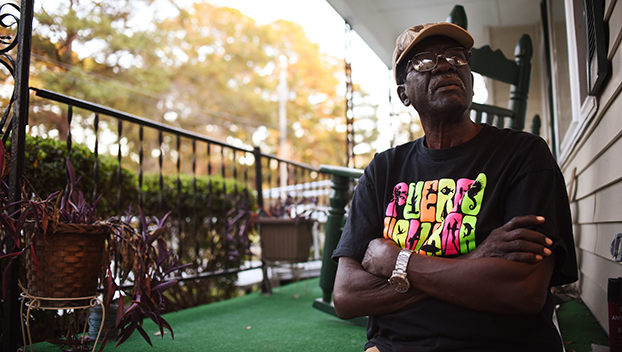 oe Conrad sits on his porch as he reminisces about his more than 36 years spent in the United States Military. Conrad, who traveled to 19 foreign countries and every U.S. state before retiring from the armed forces in 2005, has had recent heart troubles, but remains positive and upbeat thanks in part to the help he’s received from his neighbors. (Nicole Hester / The Natchez Democrat)

NATCHEZ — As a man of faith, Natchez resident Joe Conrad said he truly lives by the Golden Rule of “Love thy neighbor.”

Faith has carried Conrad through many trying periods of his life, he said.First, Conrad’s faith carried him through decades in the military. Then, it led him to his current house on Magnolia Avenue, where The Dart landed this week. Those surrounding Conrad would make a large impact in his journey.

Conrad spent approximately 36 years in the armed forces, though he can actually tell you the length of his stint in more precise terms.

His tours of duty brought him to 19 foreign countries, including Vietnam, Iraq, Panama and Nicaragua, until he left the armed forces in 2005, Conrad said.

“My faith brought me a long way,” Conrad said. “I trusted in the Lord that He was going to do it, and He showed up and showed out.”

Today, Conrad said one of his favorite activities is going to Veterans Day celebrations.

More recently, faith has carried the humble veteran through tumult that occurred at his Magnolia Avenue residence.

This year Conrad suffered not one, but two heart attacks, causing most of his time to now be spent at home.

But even through life circumstances that might wither the will of some, Conrad remains thankful and keeps a smile on his face.

One reason for that is the rest of the people that line Magnolia Avenue.

Conrad’s neighbors showed their appreciation for him following one of this year’s health scares.

Conrad said while he was sick, those surrounding him heard about the trouble he was having and would constantly come over to the house, asking if there is anything they could do to help.

Those in the tight-knit neighborhood, he said, are willing to go out of their way to help each other, and Conrad is no exception.

In fact, on Thursday as he pulled up to his house, he noticed that a door of his next-door neighbor was open when it had been closed earlier.

The matter ended up being nothing to worry about, but Conrad was still quick to text someone about the incident to ensure everything was all right.

“You never know what’s going on these days,” he said.

Conrad specifically mentioned his neighbor Dannie Weeks, who helps Conrad with matters such as mowing the lawn.

After more than a decade spent on Magnolia Avenue, the relationships Conrad has built have paid dividends, as he truly appreciates the help people surrounding him have been able to provide.

“I love my neighbors, and I think they love me too just the way I love them,” Conrad said. “We look out for one another.”