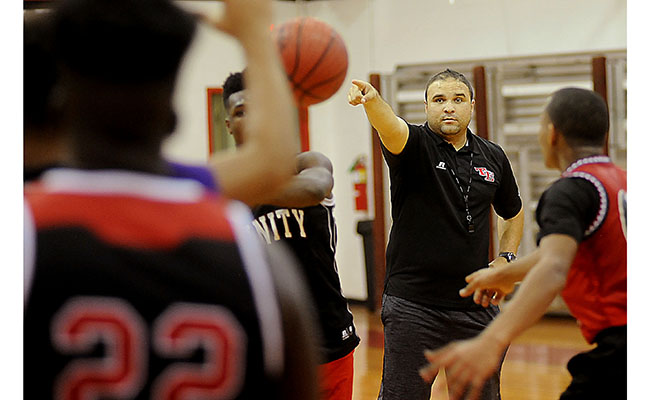 Trinity Episcopal School basketball coach Mo Rodriguez directs a boys practice at the school in Natchez. Rodriguez accepted a position as the Saints’ basketball and baseball coach this past August. (Ben Hillyer | The Natchez Democrat)

When Mo Rodriguez began his coaching career at Trinity Episcopal this past August, he needed a place to start building the Saints’ basketball team.

Luckily for him, he didn’t have to go very far.

“This is one of the greatest groups of athletes I’ve ever seen together. The athleticism of these kids is amazing,” Rodriguez said. “It’s a great group of kids and they have been working really hard.”

Trinity’s basketball roster is composed entirely of players who also participated on its football team. Having lost the MAIS Class A State Championship last month, Rodriguez said he is eager to see how the players transition to a different sport.

“They will do whatever you ask them to do,” he said. “That’s the kind of players you want, but we just need to work on fundamental basketball. We are trying to build them the same way (football) Coach (Graham) Roberts did — making sure they have a good attitude and are playing together.”

Trinity has four seniors, including Dee Fleming, Kris Genous, Mark McGraw and Cedric Daniels. The quartet will do its best to lead the Saints to its fourth consecutive district championship.

To get there, Rodriguez said Trinity will have speed on its side.

“I think we will be the faster team on the court, but our main focus right now is on shooting,” he said. “I know we can improve on that, anywhere from the field to outside the 3-point line — even free throws.”

As the Saints progress, Rodriguez said he hopes Trinity doesn’t lose its dedication.

“I’ve told them athleticism doesn’t win championships,” he said. “What we do is put in a lot of hard work — get better every day. There is always a next level, and it will never be given to them. They will have to work for it.”

Rodriguez said while the Saints do exude a committed work ethic, he knows anything could get in the way.

“It’s hard because they are teenagers. Their minds are everywhere,” he said. “I tell them that whatever they do, for them to focus everything on that. If you’re at basketball, focus on basketball. If you’re in the classroom, focus on your class.

If their minds start to wander, their focus is going to be somewhere else.”

In addition to the boys team, Rodriguez is also taking over as coach for the girls. On the flip side, he said the girls team will present its own challenges.

The Lady Saints will be led by just one senior in Ja’Mescya Queen, followed by newcomer junior Cecile Croquet.

“It’s going to be a completely different season for them,” he said. “I’m very proud of the way they come out wanting to improve.

“We are just so young and have a bunch of girls who have never played before.”

After 12 years of coaching Rodriguez admitted his dedication definitely pays off, but said he also likes to keep it loose.

“They know I don’t play around, but at the same time I like to have fun,” he said. “I think you have to have fun sometimes.”

Despite both the boys and girls beginning their season 0-2, Rodriguez said he is excited to see where the season leads.

The Saints are set to play their next set of games tonight at Cathedral, with varsity girls slated for a 6 p.m. tipoff.

“So far, it has been great,” he said. “We love the small community. I love spending the time with both teams. Everybody has been so welcoming.”