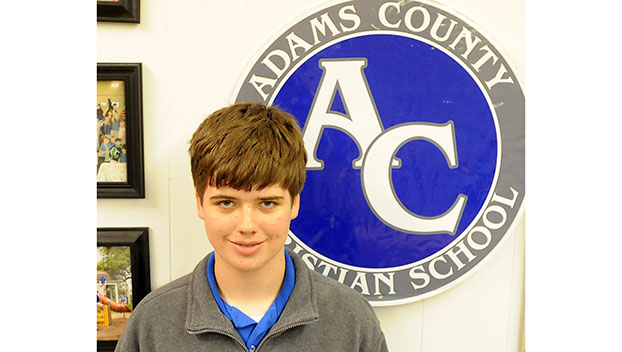 NATCHEZ — Lane Rehms said he is waiting on a calling.

Rehms, a ninth-grader at Adams County Christian School, has been preparing for college and for his future for a long time, but he has not quite decided what that future will be.

Rehms, who is interested in computer programing, math, science and reading, said he wants to wait until he finds a passion, a true “calling,” before he commits to a career path.

Before he gets that feeling, however, Rehms said he wants to start preparing.

Rehms is a straight-A student — he has maintained a 95 average or higher in every class since he was in first grade.

He was student council president in sixth, seventh, eighth and ninth grade.

“Leadership opportunities teach you to lead,” Rehms said. “Everyone needs to know how to lead.”

Rehms is organized and particular. He has a resume of his volunteer hours and spelling bee wins coupled with athletic and academic accolades.

Rehms said in his free time, he likes hunting and fishing like many kids his age, but he also enjoys playing with computer programming.

“There’s just so much you can do,” Rehms said.

He likes designing small projects in Javascript and said he recently created a game and uploaded the program to his graphing calculator.

When asked if he would like to pursue a major in computer science, though, Rehms balks.

Rehms said he gets different influences from his parents, Gary Rehms and Danna Mooney.

Rehms said his mother guides him in his schoolwork, helping him when he cannot decipher a new problem or learn a new skill.

“I really look up to her academically,” Rehms said. “She’s a chemist; so, she’s really smart.”

On weekends when he is with his dad Rehms said he is more likely to learn everyday, practical knowledge.

“When I’m at my mom’s, I’m normally working on a computer or playing video games but at my dad’s we’re always hunting or fishing,” Rehms said. “It’s like living a split life.”

Both sides of his “split life,” he said, prepare him for the future.

At 14, Rehms does not have to have a life plan figured out, but he said he thinks about what he will do constantly.

In the spring, Rehms said he wants to take the ACT test early.

“I just want to get the feel for it,” he said. “So whenever I do have to take it for scholarships and stuff, I’ll know what I’m doing.”

No matter what the future holds for him, Rehms said he will be ready.