Cathedral Lady Wave senior brings players together on, off court 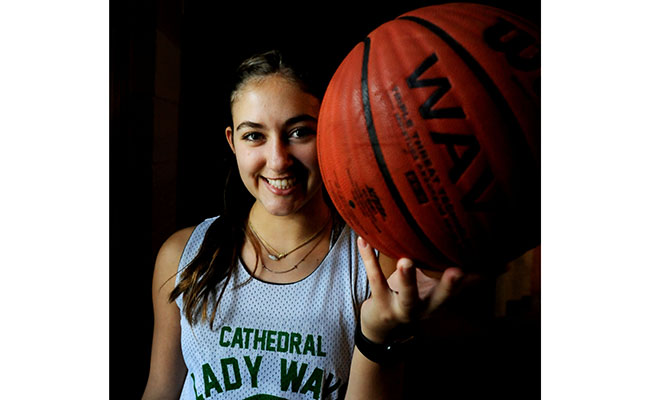 One player Arnold never has to worry about is senior point guard Caroline Kaiser.

“As a point guard, it’s very important for them to be in charge and be in control. Whether you’re a team leader or not, it’s like the quarterback in football,” Arnold said. “At the top of her list of strengths is being a competitor, and that’s who you want driving your team.”

Kaiser has led the Lady Wave (6-3) so far this season in a multitude of statistical as well as value-based categories, Arnold said. She led her team with 14 points Tuesday in its win over Trinity Episcopal.

“She is a fantastic athlete — her speed, agility. She understands sports. When you watch her play, she can’t play any harder,” Arnold said. “She is going to give you everything.”

Perhaps more important than her drive between the lines is Kaiser’s determination to bring together the Lady Wave as a family.

Just last week, Kaiser initiated a team talk when she thought Cathedral could up its performance.

“We really just needed to work on our teamwork,” she said. “I don’t think it would be anybody else’s responsibility. I just felt like if nobody else was going to say it, I needed to.”

Arnold said that type of leadership is invaluable, especially for the program he is trying to maintain.

Kaiser said to have their support, as well as that of the rest of the Lady Wave, makes leading a team much easier.

“We have really good chemistry. I know it will get a lot better throughout the season, too,” Kaiser said. “We know each other and we trust each other.”

The understanding, Kaiser said, comes from a lifetime of playing.

Kaiser also competes as a Cathedral cheerleader, as a softball player and runs track.

“I’ve played them my whole life. I’m just used to it,” she said. “I will miss playing with my friends.”

Kaiser and the Lady Wave will be back in action at 6 p.m. tomorrow night when they travel to Amite School Center.