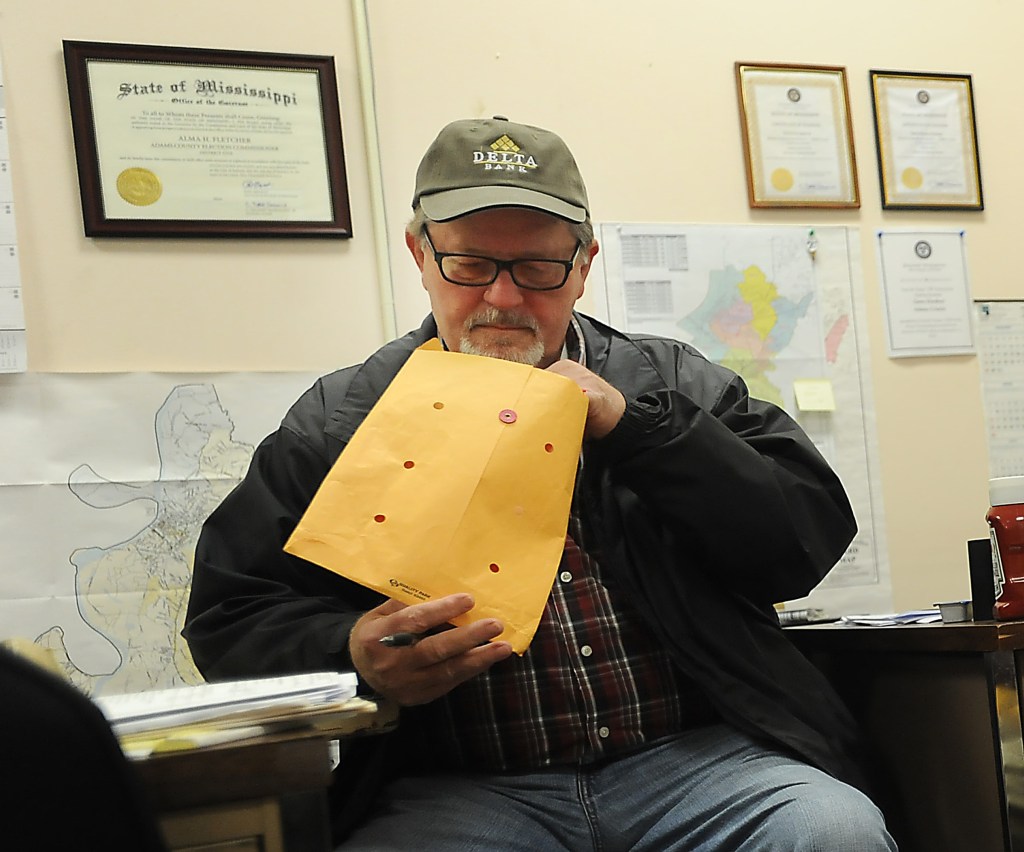 NATCHEZ — Adams County Justice Court judge candidate Danny Barber reviewed election materials Thursday that show he lost by just one vote.
After looking through the affidavits, absentee and mechanized voter tallies, Barber said he still has not decided how he wants to proceed.
He is running out of time.
A candidate has 12 days to call for a recount or take his objections to a judge. His window of time to object to the results began on Nov. 29, the day after candidate Eileen Mary Maher was announced as the new southern district justice court judge after a one-vote win.
In the courthouse Thursday, Barber sat hunched over the various ballot boxes, which had to be unzipped, unsealed and then unlocked before reaching the contents inside. For each box, Barber made a note in a little yellow notebook of the number of votes, absentees and affidavits.
Maher, who sat across the room doing a crossword puzzle, reviewed very little of the material.
“I’m not done yet,” Barber said. “Everything looks good except that one absentee.”
One absentee vote among the 45 Barber inspected was signed incorrectly, with none of the lines in the signature crossing the fold of the envelope’s seal. The technicality is supposed to prove that the ballot has not been opened or tampered with.
“That’s what I was afraid of,” Barber said.
Circuit Clerk Eddie Walker, who opened and resealed the boxes for Barber’s inspection, said absentee ballots are not verified at the polls on the day of the election and sent back to be counted by the resolution board.
Since the absentee ballot was incorrectly filled out, Barber said the error should have been caught at the polls.
Which way this particular vote was cast is not known. Barber was only able to review the tallies and the materials turned in with the votes, not the actual ballots.
Normally, one vote being in question would make little difference in an election. When one vote is the difference between a tie and a win, however, Barber said the stakes are raised.
“It’s worth the double check,” Barber said. “That one ballot could make it 50-50.”
Barber said he spoke to members of the resolution board, who tally and announce the official results of elections for the county, Thursday evening.
“They seemed like this was the first time this has happened,” he said. “I’ve got to find out the procedure to go on from here.”
Another absentee ballot was discounted from the race because the voter had voted for Maher, Barber and a blank write-in candidate.
Maher, who sat through the review but left immediately after, said she was not nervous.
“I have full faith in the election commission and the circuit clerk,” she said.
Barber’s decision must be made before next Friday, in keeping with the 12-day rule. For now, however, Barber said is not sure how he will proceed, or if he will.