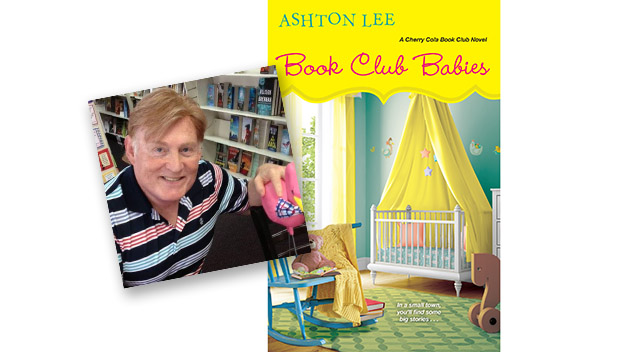 NATCHEZ — Natchez native Rob Kuehnle is set to be in Natchez today signing copies for the final book of the Cherry Cola Book Club series.

Kuehnle, who writes under the name “Ashton Lee,” is scheduled to sign books from 1 to 3 p.m. at Uptown Grocery, with copies of “Book Club Babies” supplied by Turning Pages Books. The decision to sign at Uptown Grocery is inspired by a chapter in the book.

“In the sixth novel, ‘Book Club Babies,’ three pregnant women — members of the book club — develop cravings as pregnant women do,” Kuehnle said. “In a chapter called The Free Sample Sisters, they swoop down on free samples given away at a grocery store on Wednesday. They kind of run wild.”

Kuehnle said he has been intrigued by what Virginia Shafer has been doing at Uptown Grocery during visits and the store will be offering samples.

“Virginia and I thought it would be a cute idea for her to feature free samples from some of the dishes in the book, as well as her specials,” he said. “You can pick up a little food and maybe for the holidays get a book, which of course would make a great Christmas gift.”

This would not be the first time Kuehnle has had a signing in a restaurant, as he had a signing in 2015 at Fat Mama’s Tamales, which was featured in the series’ fourth book, “A Cherry Cola Christmas.”

The book is set in the fictional northeast Mississippi small town of Cherico, situated on a lake. Kuehnle said the town is not Natchez, but some characters are blends of people that he grew up with and loved.

In the sixth and final book of the series, three members of the book club get pregnant and face challenges along the way.

One of the pregnancies is the series’ heroine Maura Beth McShay.

“She has to deal with her socialite mother who wants to name the baby using awkward family names,” Kuehnle said.

The other two pregnancies are members of the book club, Periwinkle Place and Elise McShay, who is also the sister-in-law of the main character.

“Periwinkle is the owner of the most successful restaurant in Cherico,” Kuehnle said. “She married her pastry chef, and it is a mixed marriage. Her struggle is dealing with her mother, who will not accept her decision to marry this man and is threatening to not see the grandchild.”

Elise teaches women’s studies at the University of Evansville and is taking a one-year sabbatical to have a baby, Kuehnle said.

Kuehnle said all three women go on different journeys, “and by the end of the book, the second generation of the book club is born.”

While one series is coming to an end, Kuehnle said his publisher Kensington has signed him to write a series of murder mysteries all tied to the game of bridge.

The first book will be released in February 2019 and will be titled “The Grand Slam Murders: A Bridge to Death Mystery” in which four wealthy widows are simultaneously poisoned while at the bridge table.

The series will be set in the Mississippi River port town of Rosalie. Kuehnle said Rosalie would be modeled much more after Natchez.

“I am always careful to blend characters, so to not portray any particular person that I know,” he said. “These four women are what you would call socialites from old families in the historic town of Rosalie. We all know what Rosalie is.”

The series will follow a young woman reporter who works for the Rosalie Citizen and becomes an amateur sleuth in the case.

“She has been saddled with the social column, wedding announcements and engagements,” Kuehnle said. “But she does not want to do that. Her goal is to become an investigative reporter. She hopes to get a promotion by helping the police solve the murders of these women.”

Kuehnle said he was looking forward to Saturday.

“I want to invite all of my friends and family members to drop by Uptown Grocery and say hello,” he said.

NATCHEZ — The grouchiest of Grinches is sure to get into the holiday spirit at this year’s Friends of Library... read more