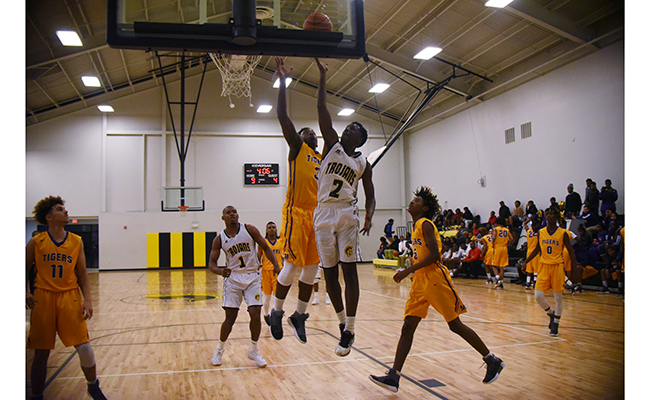 Ferriday High School’s Marquell Griffin floats in a basket Thursday night during the Trojans’ win over Marksville in Ferriday. Griffin scored 29 points to lead the Trojans to the win. (Nicole Hester | The Natchez Democrat)

Ferriday High School began the nightcap of its home tournament Thursday with a bang — a dunk from senior Dantrieze Scott.

Despite the electric start, the Trojans played a roller coaster of a game, ultimately pulling away for the win over Marksville, 79-67.

Ferriday held a 10-point lead by the end of the first period, 19-9, aided by Scott’s spark, a 3-pointer from Carlos Collins and a break-away layup from Montrieze Sandage.

By halftime, however, Marksville trailed by two possessions, 36-30.

“We let them come back,” Watkins said. “We fell off our game.”

The Tigers continued to stack up with Ferriday into the third quarter, briefly taking the lead.

Ferriday was able to find another jolt of energy in the beginning of the fourth period, forcing multiple turnovers and floating in three consecutive layups in less than a minute.

The Trojans led by double digits with just less than four minutes remaining, 66-55.

Marquell Griffin led FHS to the win with 29 points, and Sandage chipped in 18. Scott ended with 12 points of his own, while Collins added another nine.

“We fought through it. It’s a process,” Watkins said. “The only thing I told them is that is was time to step up and play. We have to learn how to finish. We still have a lot of room for improvement.”

Ferriday (5-6) is scheduled to play Marksville again at 1 p.m. Sunday in the tournament.

The Ferriday Lady Trojans came out to a strong start, leading by nine points at the end of the first quarter, but surrendered its momentum in a 63-58 loss to Tensas to begin its home tournament Thursday.

“It might just be something with Tensas,” Ferriday coach Lisa Abron said. “We’ve played them a bunch of times already. It just wasn’t our night.”

The majority of Ferriday’s early success came from easy layups under the rim — only attempting two jumpers in the first period.

The Lady Trojans slowed down in the second quarter, however, and allowed Tensas to take its first lead of the game two minutes before halftime.

Ferriday also got into early foul trouble as Tensas sank 7-of-13 free throws in the second quarter.

“We had a lot of missed layups,” Abron said. “We beat ourselves up.”

The Lady Trojans were close to a comeback, inching within four points with just more than five minutes remaining in the game, but couldn’t hold on.

“We have to put this behind us,” Abron said.

The Block Lady Bears went back and forth with Marksville, falling in the end, 44-39.

Delicia Ceasor had nine points for Block, Laterria Lee had eight and Cintina Green added seven in the loss.

The Lady Bears will face Ferriday at 6 p.m. today.

A wave of cheers flooded the Ferriday Junior High Gym as Tensas’ Davonta Holmes sank a fourth-quarter free throw to propel his team into triple digits for the win over Block, 103-55.

The Bears’ efforts were led by Dorian Davis with 26 points, including four 3-points.

Block is scheduled to play again at 5 p.m. today against Marksville.