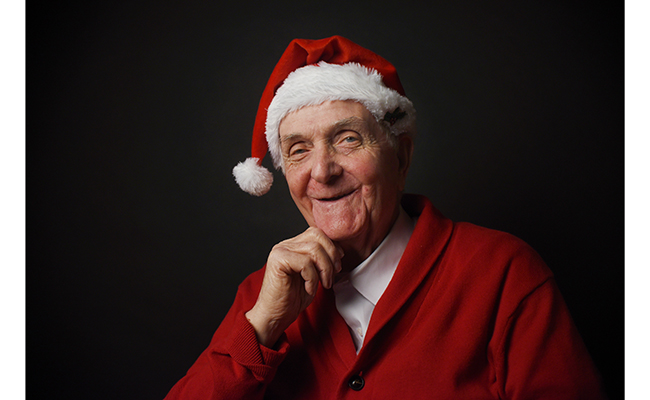 Bob McWilliams, who has lived in Natchez since 1954, will be the stand in for Santa for the philanthropic Santa Claus Committee to take the Rudolf position, leading the parade through the town and throwing candy to children. (Nicole Hester | The Natchez Democrat)

Lucky for Bob, those things will collide at the annual Santa Claus parade on Dec. 23, and he will be right in the middle of it all, with a red hat and coat.

McWilliams, a man with bright eyes and a ready smile, has lived in Natchez since 1954 and has been a member of the Santa Claus Committee since 1987.

McWilliams said he was drawn to the philanthropic side of the organization moreso than the parties and parades.

“I keep reminding people: Why are we doing this?” McWilliams said. “It’s for the children.”

This year the Santa Claus Committee will donate more than $12,000 to local charities for children.

The Santa Claus Committee was formed in 1928 as a charity for children. Former Democrat publisher James Lambert was its founder. Almost every year since then, a specially chosen Santa stand-in has taken the Rudolf position, leading the parade through town and throwing candy to children lining the streets.

This year, the man in the red hat will be McWilliams.

“It’ll be a good memory,” McWilliams said. “As long as I live, it’ll be something I can enjoy.”

McWilliams, who said he has wanted to be a Santa for years now, said he knew early about his nomination, but that did not damper his excitement.

What he’s looking forward to most, McWilliams said, is “letting the children have a good Christmas.”

McWilliams, retired from the Mississippi Job Services and Mississippi Army National Guard, operates the Quality Tax and Bookkeeping Service and is a member of the Natchez-Adams County Chamber of Commerce.

For McWilliams’ wife, Ruth, being Mrs. Claus has had its own responsibilities.

“They told me ‘All you have to do is the party,’” Ruth McWilliams said. “But it’s a huge party.”

Ruth said she and Bob had been planning for months now, making sure everything was right.

“He’s so excited,” she said. “He loves kids so much. He has a real soft spot in his heart.”

Ruth McWilliams said she wanted the Santa Claus Committee bash at the Grand Hotel to highlight traditions from Natchez’s past.

“I want to bring out old things we used to do,” Ruth McWilliams said.

For Ruth, who grew up in Natchez, the Santa parade is one of the hallmarks of the season.

Ruth McWilliams said she remembers standing in the street for hours waiting on Santa Claus to come.

It may not be a tradition Bob McWilliams grew up with, but he says he loves it just the same.

“It’s going to be a lot of fun,” Bob McWilliams said. “All my years I’ve been blessed. And I’m thankful.”