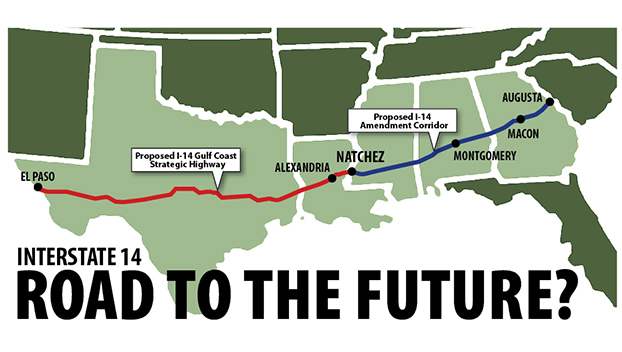 Editor’s note: This is the first installment in a four part-series about a proposed interstate that would run through Natchez and the impact a federal highway would have on the community.

NATCHEZ — Interstate 14 will “save this city.”

Those are the words Natchez Mayor Darryl Grennell has used to describe the importance of a proposed federal highway planned to pass right through Natchez.

Officials recognize the plan would take years — likely decades — to come to fruition, but with the White House reportedly planning to roll out a $1 trillion infrastructure bill, leaders throughout Texas, Louisiana and Mississippi believe the window for I-14 is opening.

Theoretically, the focus of these leaders right now is to get the interstate to stretch from West Texas all the way to Laurel.

Though much work remains, what occurs over the next couple of months could prove to be a catalyst for bringing the interstate here.

But before that happens, here is a look at where we stand:

What preparation has Mississippi done to date?

The short answer to that question is not a lot, but Natchez officials recently began efforts to get the ball rolling.

Federal Highway Administration Public Affairs specialist Neil Gaffney said the department has no information on any feasibility studies done for I-14.

“I think at this point, it’s all just sort of conjecture and discussion,” Gaffney said.

But the discussion has at least begun in Mississippi as of early November, when city leaders attended a meeting in Alexandria held by the coalition spearheading the I-14 effort.

Though local leaders in Natchez refer to the project colloquially as simply “I-14,” the project is formally known as the Gulf Coast Strategic Highway, which is where the coalition gets its name.

Gulf Coast Strategic Highway Coalition Executive Director Gary Bushell said the group has been working on this project in Texas and Louisiana for years, but he is now starting to see their efforts pay dividends.

In 2015, Texas received a congressional designation for the interstate mostly consisting of U.S. 190, which cuts through the center of state. This April, the first section of I-14 was officially unveiled: a 25-mile stretch of U.S. 190.

To date, Texas is still the only state that has any designated roadways for the interstate.

That, Bushell said, is the next step for both Louisiana and Mississippi.

“Things that would both need to happen in Louisiana and Mississippi … would be a congressional designation. (The congression designation) doesn’t really cost any money other than work to get it done,” Bushell said.

The White House’s infrastructure bill — expected in 2018 — could be the means to get that designation.

“This would be a pretty opportune time to get the designation and then figure out how to incrementally build,” Bushell said.

Natchez Inc. Executive Director Chandler Russ, one of the local officials who champions bringing I-14 through the city, said local leaders are on board with that plan.

“We’re seeking that designation of I-14,” Russ said. “That’s what we’ll be requesting more than likely sometime in the 2018 session in congress. That’s kind of what the goal is.”

What lies ahead in the coming months?

If the goal for 2018 is to get a congressional designation, the work toward achieving that goal begins immediately.

With no designation and no significant work done to bring roadways up to standard for the interstate, local officials plan to attend multiple meetings with state and federal congressional representatives in the near future pertaining solely to I-14.

Russ said he has already met with multiple economic development authorities along the U.S. 84 corridor, but he hopes to meet with Rep. Sam Mims, R-McComb, Rep. Robert Johnson III, D-Natchez, and other state representatives on Dec. 29.

On Jan. 8, another important meeting will take place in Laurel. Russ said that meeting would involve talks with Mississippi Transportation Commissioner Tom King.

“We’ll be seeking Mr. King’s support for I-14 along those lines,” Russ said. “That’s kind of our next step.”

And just two weeks later, Russ, Grennell, and other local leaders intend to head to our nation’s capital.

Russ said a congressional briefing would be held the week of Jan. 22 in Washington, D.C., where Mississippi, Louisiana and Texas congressional delegates will meet.

That meeting, Russ said, will go toward garnering support of I-14, including from the Mississippi Department of Transportation.

That meeting will cap off what looks to be a pivotal month for the project. In the meantime, the leaders will continue their aim of drumming up support throughout the state.

Where will the interstate actually go?

Aside from Texas, the actual route of I-14 is not set in stone.

Though the highway has been conceived as connecting El Paso, Texas, to Augusta, Ga., the ongoing effort is a three-state project.

The first conceptualization of the interstate, back when it was proposed as the 14th Amendment Highway, had the eastern and western termini, respectively, as Augusta and Natchez. Proponents of expanding the project suggested stretching the interstate all the way to Texas.

But the Gulf Coast Strategic Highway Coalition currently has no plans to extend the project east of Mississippi.

Bushell said he believes anything further would be unnecessary given the current highway infrastruce in Mississippi, which includes major interstates such as I-10, I-55 and I-59, with which I-14 would connect should it extend to Laurel.

“Once you hit some of the interstate highways that are already in MS, you can get wherever you want to go (in any direction),” Bushell said. “I don’t anticipate seeing any reason why it would go past Mississippi. So far as I know, the Interstate Highway System (in Mississippi) has got the capacity it needs.He added, however, that Alabama and Georgia could always get on board if they desired.

“That would be up to those states, obviously,” Bushell said.

But for now, all Mississippi officials can focus on is getting the highway here.

Grennell and Russ have said they hope to get U.S. Congressmen, such as Rep. Gregg Harper, R-Mississippi, and Sen. Thad Cochran, R-Mississippi, to voice support for the project.

Chris Gallegos from Cochran’s office in Washington, D.C., said in a statement the senator is interested in I-14 and seeing infrastructural needs addressed in 2018.

“Sen. Cochran looks forward to learning more about the I-14 when Mississippi leaders visit the capital early next year,” Gallegos said. “Sen. Cochran hopes congressional authorizing committees will make progress next year in writing legislation to implement President Trump’s infrastructure plan to address critical transportation infrastructure needs across the country.  This plan should help address our needs in Mississippi.”

A long road lies ahead, but officials have said the opportunity to capitalize on this project is fast approaching. And for Mississippi, January marks the beginning of the long process.

NATCHEZ — Family members and loved ones of fallen veterans gathered on a cold mornning Saturday to lay wreaths... read more

Despite changes, our mission remains same

Donations help prepare hospital for any future surge of patients