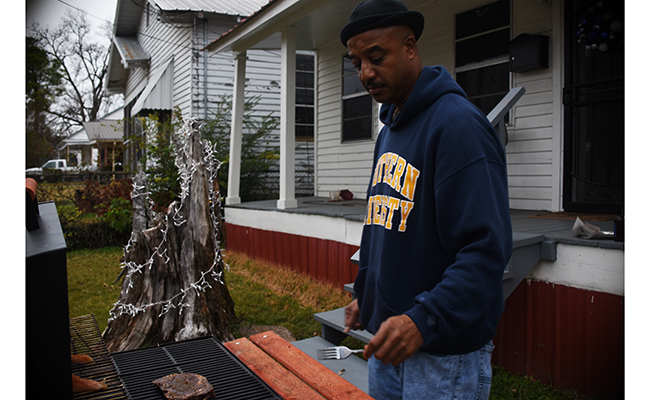 NATCHEZ — Keith Wallace was trying something new Sunday afternoon.
Wallace was spending a lazy Sunday evening by the grill when The Dart landed on North Union Street.
“I’m trying something experimental,” Wallace said. “I’ve never cooked fish on the grill before.”
Alongside some steaming deer sausage and a thick steak, Wallace gently laid strips of fish coated in seasoning.
Though the meal was a fun one, Wallace said he hopes it is one of his last in Natchez.
Wallace, who grew up in Natchez, moved back last January after 10 years living in Jackson as a car salesman.
Selling cars, Wallace said, is fun.
“You get to be your own boss,” Wallace said. “For the most part, you set your own schedule.”
But after working in Natchez for only 10 months, Wallace said he is ready for another move.
“With the economy here like it is, it’s hard,” Wallace said. “We’ve got to get more people here. We need jobs bad.”
As Wallace grills in his front yard and the smoke curls slowly upward, cars pass by.
With each car that passes, Wallace throws a hand up in greeting. Some people honk or slow while passing.
Wallace has friends here, but he knows he is going to leave again.
Jackson holds painful memories for Wallace.
Just four hours after learning his mother had died, Wallace said he was robbed at gunpoint while going home in Jackson.
“I’ll never forget the date,” Wallace said. “It was Jan. 4, 2012. Losing your mom — that’s the hardest thing you’ll ever do. And then four hours later, I had a gun in my face.”
In January, Wallace moved home to Natchez to be close to his family and old friends.
He had a job here in Natchez, but had to take a major pay cut for the same work, too.
Though Wallace said he has friends and family here, he does not think he will be able to stay much longer.
“I don’t really like Jackson,” he said. “But it has much more opportunities for work.”
Wallace said he is in danger of damaging his credit, and though he does not particularly want to move back to Jackson, he says it is familiar to him.
“I know people in Jackson,” Wallace said. “I have a good job there. I left on good terms.”
Still, though, Wallace has good memories in Natchez.
When asked if his hometown was a nice place to grow up, Wallace sighs.
“It used to be,” he said.