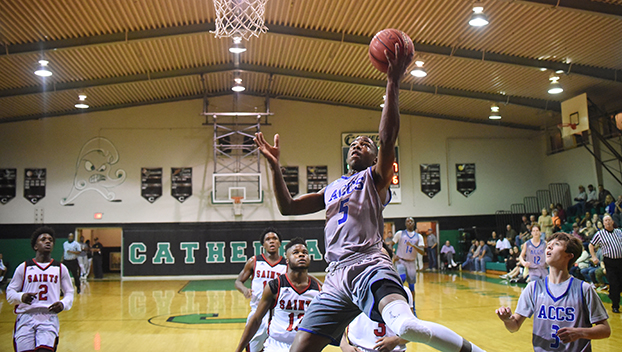 NATCHEZ — Trinity and ACCS boys basketball turned heads Friday night — literally — as both teams showcased their athleticism while pacing up and down the court.

The Rebels beat the Saints, 61-46, in their second game of the Cathedral Holiday Tournament, but the score did not reflect the competitiveness of the game.

After ACCS jumped out to a 17-4 lead, Trinity began a furious comeback less than two minutes into the second quarter.

A series of steals and a barrage of fast-break buckets brought the Saints back from down 13 to just four at halftime.

The athleticism and speed of Trinity put pressure on the Rebels.

“They are just so athletic,” Rebels head coach Richy Spears said. “I watched them last night, and I knew we needed to slow them down somewhat … sometimes you can run, but you’ve got to be smart.”

Trinity forced steals using active hands on defense, such as those of junior T.J. Peyton, and gathered key offense rebounds, many made by freshman Tre’Von Jackson, to stay close in Friday night’s contest.

But ACCS was able to slow the game down and stave off Trinity’s attempt at a comeback in the second half.

Spears preached patience to his players throughout the game, and while he said the Rebels made a few mistakes Friday night, they got clean looks at the bucket when they stuck to their game plan.

Senior Josh Day poured in 11 of his 20 total points in the third quarter, but Spears said he saw a well-rounded performance from his squad. He mentioned senior Darius Demby as an example of a player who stepped up win fouls started to pile up for ACCS.

“I just thought overall it was a team thing,” Spears said. “We got people in foul trouble. Josh got in foul trouble. We had, though, some kids on the bench that stepped in, wasn’t overwhelming (but) just did a good job.”

The Rebels pulled away in the fourth quarter after the Saints continued to grab rebounds and get to the free throw line, but could not capitalize on opportunities.

“We missed, I think, 22 (or) 24 free throws,” Trinity head coach Mo Rodriguez said. “That would have been the ball game.

“Overall, we moved the ball better. I think we can outmatch any team — we just need to get better at our shooting.”

Coming off the Cathedral Holiday Tournament, Spears hopes a much-needed rest over the holiday will help his team turn a corner.

“Our guys are exhausted — coming from football, going all the way to State, no break, going straight to basketball. I think this following break that we’re going to have … is going to be good for them. They need their break.”

Leaders working to get ball rolling on interstate proposed…